This reference architecture is designed to do the following:

To implement this reference architecture, you will need the following:

Setting up the Architecture

This architecture contains the following elements: 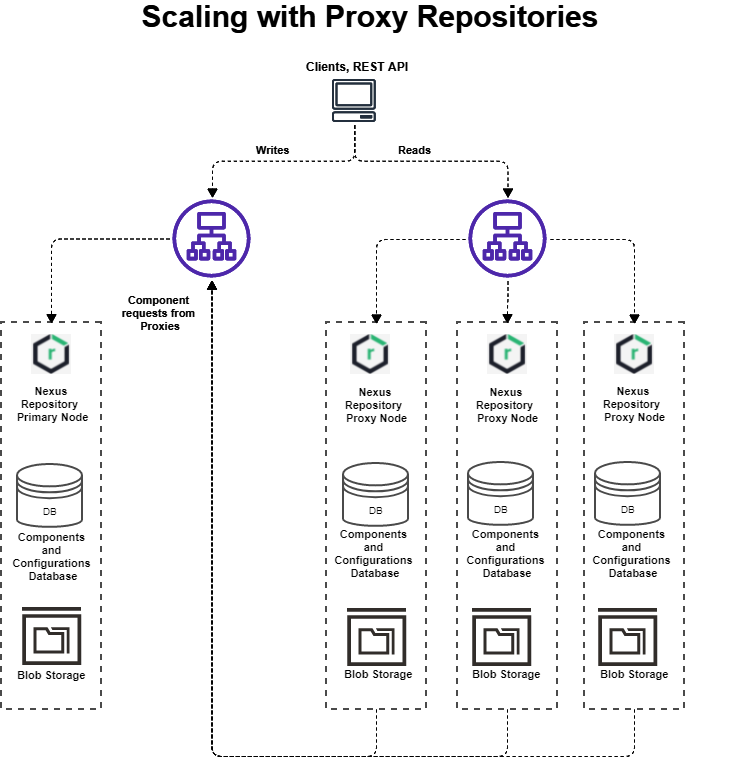 This document assumes that the primary node is pre-existing and that only the layer of proxy nodes is new.

The primary node may itself be a more complex deployment with its own load balancer, such as one of the resilient deployment models, or a legacy High-Availability Clustering (HA-C) cluster.

In this reference architecture, the proxy nodes are deployed in the same data center or availability zone (AZ) as the primary node in order to keep the request latency low.

In the case of cloud deployments that have a resilient primary node (a deployment that spans multiple cloud AZs), the proxy nodes should also be spread between multiple AZs. This ensures that proxy nodes with warm caches are still accessible should an AZ fail.

All  repositories in the primary node must exist in the proxy nodes in both AZs.

Other than proxy connections, each proxy node is independent from its peers and from the primary node. They must not share blob storage, application folders, or external database instances (if applicable), nor should they be part of an HA-C cluster.

Repositories on the Proxy Nodes

The proxy nodes should have a proxy repository configured for each end user-accessible repository on the primary node.

Proxy repositories have negative cache settings that control how frequently they re-check for unavailable components. You should leave these set to their default values on the proxy nodes.

If you frequently publish new versions of components, reduce the setting for maximum metadata age from the defaults or set it to zero to ensure that the proxy node regularly checks the primary node.

This also centralizes any repository routing rules at the primary node, reducing the amount of configuration that you must maintain at each proxy node.

Because the proxy nodes are not the system of record for any components, you can configure aggressive cleanup policies for them. As a baseline, we suggest removing all components that haven’t been downloaded in only a few weeks.

This reference architecture is compatible with a broad range of load balancers such as the following:

One simple balancing strategy is "round robin," and this is adequate for most deployments; for other options, see Advanced Considerations below.

Setting up a load balancer requires header changes similar to those required by a reverse proxy. See Run Behind a Reverse Proxy for examples.

Choosing the Number of Proxy Nodes

The number of proxy nodes you will need depends on your use case. To improve the scalability of a primary node under continuous read load, a single proxy node may be sufficient.

For situations with large request spikes, it may be necessary to use multiple proxy nodes with pre-warmed caches in order to sufficiently protect the primary.

For authenticated read loads, you will need to set up the appropriate roles, privileges and content selectors on each proxy node.

We do not recommend using this pattern with user tokens as they are not synchronized between the various instances.

Using this pattern may reduce search result completeness for Maven users as they must rely on Nexus Repository’s built-in search features (the UI or REST endpoints).

This limitation does not apply to the search commands of non-Maven clients using Visual Studio’s NuGet functionality or the npm command-line client. Nexus Repository passes these ecosystem-specific search commands upstream from proxy node to primary node and from primary to remote repositories (if applicable).

From time to time, you may add or remove repositories from your primary node. This will require keeping the proxy nodes updated with appropriate configurations.

For proxy nodes that are long-lasting, the simplest approach is to use the Repositories REST API to add, update, and remove repositories from the proxy nodes as necessary.

When considering this pattern, the primary node should already be an enterprise-sized machine capable of coping with your regular loads. For this pattern, the number of Jetty Threads can be increased from 400 (default) to 600.

We recommend working with our support team to right-size the primary node. See System Requirements for more information.

An example primary node configuration could appear as follows:

Do not modify negative cache settings from their defaults for this use case.

The optimal storage size for each proxy node will depend on the characteristics of your load (e.g., if there is diversity or commonality in the components most requested by the readers) and the rate of new component production.

Whatever size you choose, use a cleanup policy that will keep the overall storage level within the allocated storage.

In this model, the load balancer must decode the HTTP request and route the traffic to the appropriate proxy node pool.

In the recommended model, any new proxy nodes added to the pool will start with empty caches; cache misses will be common until the proxy node has time to catch up. Initially, this may detract from overall performance for downstream clients. If the primary node has a lot of components (i.e., hundreds of thousands or millions), it may take some time before the cache is sufficiently warm to improve performance overall.

One technique for reducing the cache warming time is to clone an existing proxy node. You can do this using a normal backup and restore process on a proxy node, or by creating a snapshot at the VM or storage level and using it to instantiate a new proxy node.

Cloned nodes will start with a warm cache. Depending on the nature of the workload, even a clone from a days-old backup can be a significant improvement over an empty cache.

If you are using a cloud blob store (e.g., S3, Azure, etc.), the Nexus database includes a reference to a specific storage bucket. If you clone the Nexus Repository database/instance, this can cause two Nexus Repository instances to attempt to use the same bucket for blob storage, which will cause issues. Instead, you will need to create a different bucket and change the blob store configuration using the NEXUS_BLOB_STORE_OVERRIDE environment variable to use the new bucket as described in Using Replicated S3 Blob Stores for Recovery or Testing.

Cache hit and miss rates can be calculated from the data available at the Nexus Repository metrics endpoint ./service/metrics/data. Calculating the inbound vs. outbound requests through the proxy node.