It is recommended that the nodes are started in the reverse order in which they were shutdown wherever possible (for example, if they were shutdown in the order A, B, C, then C should be started first, followed by B and then A). The last node shutdown will have the most current data and should be the first one started up after a full cluster shutdown.  Each node should be allowed to start completely before starting the next node.

After enabling HA-C for your Nexus Repository Manager installation, check the console or log file after launching a clustered node to confirm that all nodes have been detected.

When you start the nodes, you will see a message in the nexus.log confirming the connection of the cluster members, like the one below:

When running Nexus Repository Manager nodes inside docker containers, you will need to specify an extended timeout, such as

to allow nodes to exit the cluster cleanly.

A node leaves the cluster through a clean shutdown of Nexus Repository Manager. A proper shutdown is performed by using the nexus.exe stop command on Windows-based systems and nexus stop on all others. When the node is leaving by a clean shutdown, the node is unregistered from the cluster. If a node that is registered in the cluster becomes abruptly unavailable (for example, the node's network link is broken, or the node's operating system crashes), that node may remain registered in the cluster despite no longer participating in database replication.

The clean shutdown is an important consideration when designing scripts for stopping a Nexus Repository Manager instance.

Nexus Repository Manager will initiate a shutdown if it receives the TERM signal, which is the default signal sent with the kill command on unix-like operating systems. A clean shutdown is also important for recovering from an outage event.

Make sure to take some time to read the section on designing your backup and restore plan. Running Nexus Repository Manager in a cluster does not reduce the need for a robust backup strategy. With a cluster, you will need to specify the repository manager instance where the task will execute. This is necessary because the backup will result in exported database backup files. These files will be placed in the configured location, on the chosen node's file system. However, since the task is relegated to a single node, this introduces the possibility that the database backup may not be executed if the node is no longer participating in the cluster. In some environments it may be preferable to configure two different nodes to execute backup tasks on alternating schedules. While the Backup and Restore task is running, the Nexus Repository Manager cluster will be in read-only mode.

We encourage you to test your restore process for disaster recovery minimally every 6 months. We also strongly suggest that you test the disaster recovery plan prior to upgrading Nexus Repository Manager to a new release.

Please keep in mind Nexus Repository Manager requires that you choose and execute a separate backup process of your blob store(s) appropriate for the file system.

When clustered, Nexus Repository Manager offers the ability to specify an alias for each node. Behind the scenes, Nexus Repository Manager generates a unique identifier for each node that joins a cluster. The alias that is specified by the administrator allows a logical mapping between the system-generated identifier and the specified name. The alias for a node is stored in sonatype-work/nexus3/etc/node-name.properties. The name can be updated in the Nexus Repository Manager user interface or directly in the properties file. If the name is updated directly in the properties file, it is necessary to restart the renamed node for the change to take effect. When an alias has been provided for a node, that alias will be used in place of the identifier where appropriate. For instance, the alias will be used in logging messages and in the user interface.

Clustered Nexus Repository Manager nodes will create the same set of log files as unclustered installations. However, in a cluster, the name of the node will be added to each log message. The name that is used in the log messages will be the given alias or default to the node's system-generated identifier. The log files on each node will be rotated daily. The log files for the previous day will be renamed and compressed to save disk space.

The Nexus Repository Manager user interface contains a log viewer available to administrators. This log viewer is limited to only display log messages that have been emitted on the local node. In an environment where traffic is routed through a load balancer, this view may not be helpful. In that case, we suggest that a log aggregation system be put in place. Having a node identifier as a part of each log entry should enable better searching within such a system.

At run-time, the repository manager user interface allows you to view the status of the clustered nodes.

See Nodes for details on viewing active nodes in a cluster.

In the event a single node loses connection to the cluster, the remaining nodes will continue to make decisions on which data changes are valid. The disconnected node will reject further writes until it rejoins the cluster.

Where $N represents the number of nodes registered in the cluster and ROUNDED_DOWN finds the largest whole number less than or equal to the given parameter.

Nodes register with the cluster when they are launched.

Although Nexus Repository Manager clustering replicates data across all nodes in the cluster, a cluster can be reduced to a single node. A single node cluster will accept write transactions. You can still write to your Nexus Repository Manager cluster environment with only one running node as long as the other members of the cluster have either been shutdown cleanly or they have not started yet. If nodes in your cluster unexpectedly lose connectivity or die and fewer than the calculated majority are running, then attempts to write (such as publishing assets, changing system configuration) will fail.

Because of the quorum calculation and cluster registration algorithms, it is possible that Nexus Repository Manager's cluster table can enter a state where it does not accurately reflect the true state of your cluster. For example, if a registered member is abruptly removed from the cluster and a fresh installation is added to replace the failed node, then Repository Manager clustering may be calculating the write quorum for database transactions still considering the removed node. In this example, Nexus Repository Manager will continue to operate. However, after each abrupt removal of a node, it becomes more likely that a cluster could have difficulty achieving write quorum. 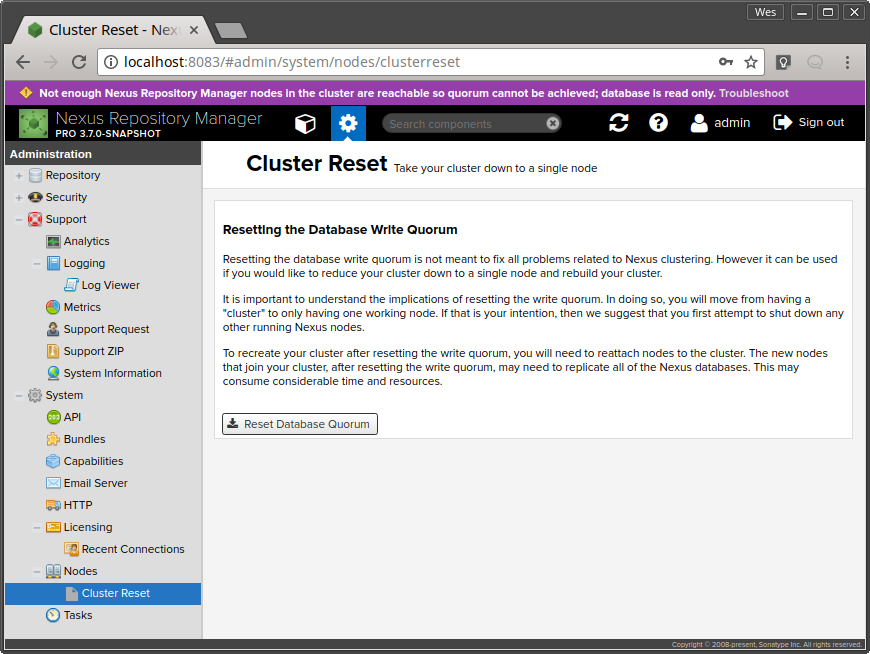 As a last resort, you can click the Troubleshoot link in the write quorum warning. On the cluster reset page, you will see the Reset Database Quorum button. When you click on the button, all entries are removed from the cluster table except for the node that processes the request to reset the cluster. In practice, this means that all other nodes need to be shutdown and removed from the load balancer rotation before resetting the cluster.

It is only safe to reset the cluster once all other nodes have been cleanly shutdown.

After the reset completes, the cluster will immediately begin accepting writes on the remaining node. Nodes can then be added to the cluster and placed back into the load balancer rotation.

Once your HA environment is set up, you should monitor the health of the nodes in your cluster. The read-only status of the cluster is visible at the http://<serveripaddress>:<port>/service/metrics/data endpoint, as "readonly.enabled", under "gauges". See the support article for the HTTP endpoints that HA-C exposes and/or the support article for enabling JMX, for more information.

You can also use the load balancer friendly status resource to check the health of the nodes in an HA cluster.

In a Nexus Repository Manager cluster, it is necessary to consider which node or nodes execute a task. Knowing how the tasks run in a cluster will be an important element of monitoring cluster health. Nexus Repository Manager now places task logging output in a separate file that corresponds to the execution of the task. Many tasks will be executed on a random single node in the cluster to balance the resource usage across the cluster. Other tasks may execute simultaneously on all nodes in the cluster. Monitoring of the task must take into account the behavior of the execution of the task. The node requirements for common tasks are listed below.

In a Nexus Repository Manager cluster, when you create an Admin - Execute script task, you are able to specify whether the task runs on all nodes simultaneously or whether the script is only executed on a single node. When a task manipulates a resource that is shared within the cluster, such as repository configuration or a blob store, the task should only be executed on a single node. However, if the task is interacting with a resource that is local to the node, such as the search indices, then the task needs to be configured with Run task on all nodes in the cluster selected.

Please see the section on designing your backup plan.

The following Single-node Tasks will run on a single, randomly-selected node in a Nexus Repository Manager cluster:

The following Single-node Tasks will run on a single selected node in a Nexus Repository Manager cluster:

The following tasks may run on all nodes or on the current node (i.e. the node the UI is interacting with):