Nexus Repository Manager can use the Lightweight Directory Access Protocol (LDAP) for authentication via external systems providing LDAP support such as Microsoft Exchange/Active Directory, OpenLDAP, ApacheDS and others.

Configuring LDAP can be achieved in a few simple steps:

All these feature allow you to adapt to any specific LDAP usage scenario and take advantage of the central authentication set up across your organization in all your repository managers.

Activate your LDAP Realm by following these steps:

The LDAP feature view, displayed in Figure: “LDAP Feature View”, is available via the LDAP item in the Security section of the Administration main menu.

The Order determines in which order the repository manager connects to the LDAP servers when authenticating a user. The Name and URL columns identify the configuration and clicking on a individual row provides access to the Connection and User and group configuration sections.

The Create connection button can be used to create a new LDAP server configuration. Multiple configurations can be created and are accessible in the list.

The Change order button can be used to change the order in which the repository manager queries the LDAP servers in a pop up dialog.

Successful authentications are cached so that subsequent logins do not require a new query to the LDAP server each time. The Clear cache button can be used to remove these cached authentications.

The following parameters allow you to create an LDAP connection:

Enter a unique name for the new configuration.

Enter Protocol, Hostname, and Port of your LDAP server.

The hostname or IP address of the LDAP server.

This field further qualifies the connection to the LDAP server. It usually corresponds to the domain name of an organization. For example: dc=example,dc=com.

Note: If the values in your Search base DN contain spaces, escape them with "%20", as in "dc=example%20corp,dc=com"

This is an improvement on the CRAM-MD5 authentication method. For more information, see RFC-2831.

The Challenge-Response Authentication Method (CRAM) is based on the HMAC-MD5 MAC algorithm. In this authentication method, the server sends a challenge string to the client. The client responds with a username followed by a Hex digest that the server compares to an expected value. For more information, see RFC-2195.

For a full discussion of LDAP authentication approaches, see RFC-2829 and RFC-2251.

The Simple Authentication and Security Layer (SASL) realm used to connect to the LDAP server. It is only available if the authentication method is Digest-MD5 or CRAM-MD5.

Username or DN (Distinguished Name) of an LDAP user with read access to all necessary users and groups. It is used to connect to the LDAP server.

To test your connection to the external LDAP server, click Verify connection. A successful connection is confirmed with notification pop up.

The connection details can be further refined by configuring timeout period, retry period and number of connection attempts in Connection rules.

Click Next to proceed to configure user and group mappings for the LDAP configuration.

Figure: “Create LDAP Connection” shows a LDAP connection configuration for the repository manager configured to connect to an LDAP server running on localhost port 10389 using the search base of ou=system. 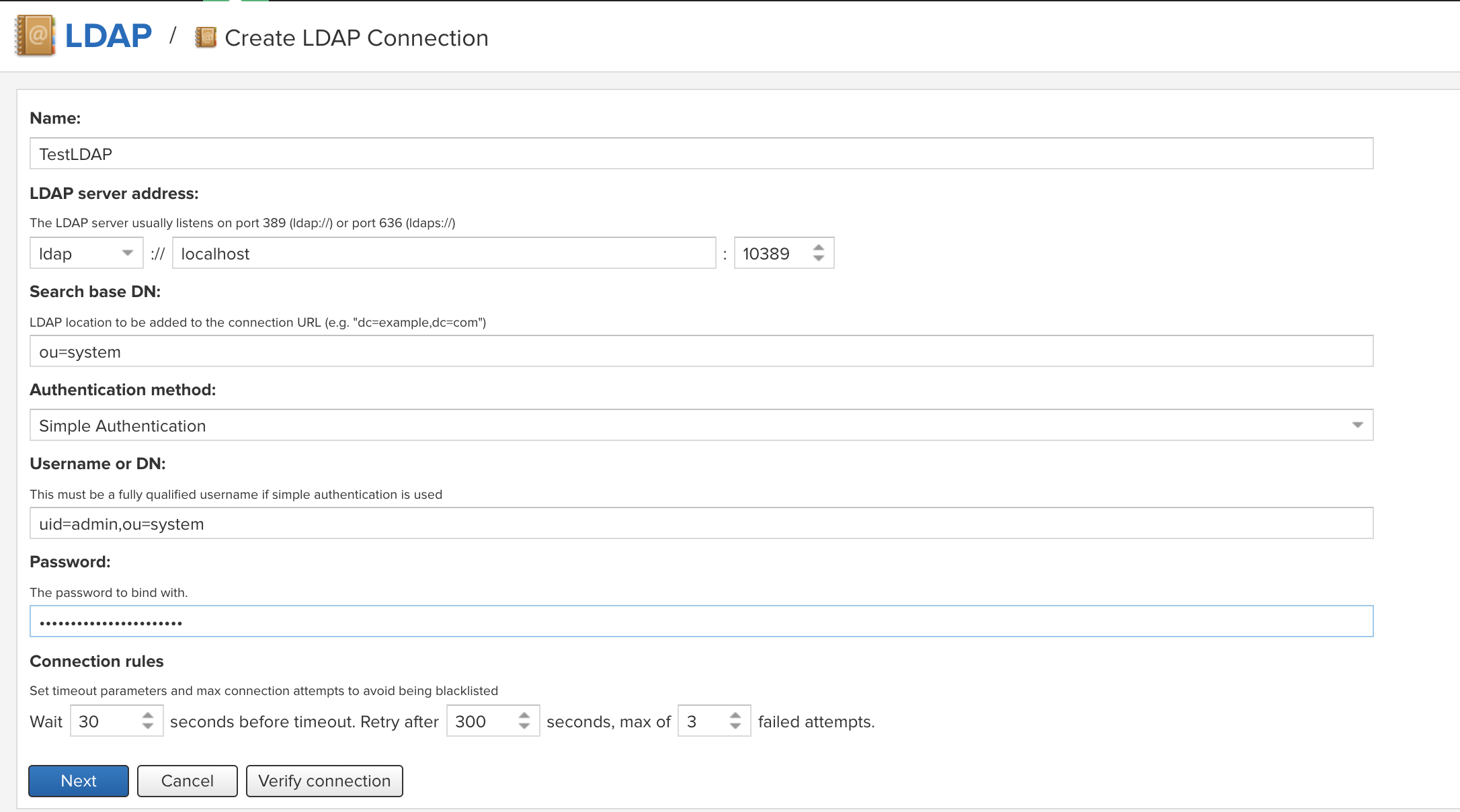 The LDAP connection panel contains a section to manage user and group mappings. This configuration is the next step after you configure and verify the LDAP Connection. It is separate panel called Choose Users and Groups.

This panel provides a Configuration template drop-down, shown in Figure: “Configuration Template for Users and Groups”. Based on your template selection the rest of the field inputs will adjust to the appropriate user and group template requirements. These templates are suggestions for typical configurations used on servers such as Active Directory, Generic Ldap Server, Posix with Dynamic Groups, and Posix with Static Groups. The values are suggestions only and have to be adjusted to your specific needs based on your LDAP server configuration.

The following parameters allow you to configure your user and group elements with the repository manager:

Check the box if True. Uncheck if False. Values are true if there is a tree below the User relative DN field that can contain user entries and false if all users are contained within the specified User relative DN. For example, if all users are in ou=users,dc=sonatype,dc=com this field should be False. If users can appear in organizational units within organizational units such as ou=development,ou=users,dc=sonatype,dc=com, this field should be True.

This value is a standard object class defined in RFC-2798. It specifies the object class for users. Common values are inetOrgPerson, person, user, or posixAccount.

This allows you to configure a filter to limit the search for user records. It can be used as a performance improvement.

This is the attribute of the object class specified above, that supplies the identifier for the user from the LDAP server. The repository manager uses this attribute as the User ID value.

An automatically checked box will allow you to Map LDAP groups as roles. With the configuration any LDAP group configured for a specific users is used to query the roles in the repository manager. Identical names trigger the user to be granted the privileges of the roles.

Groups in LDAP systems are configured to be dynamic or static. A dynamic group is a list of groups to which users belong. A static group contains a list of users. Select Dynamic Groups or Static Groups from the Group type drop-down to proceed with the appropriate configuration.

Static groups, for example as displayed in Figure: “Static Group Element Mapping”, are configured with the following parameters:

This field is similar to the User Relative DN field described for User Element Mapping, but applies to groups instead of users. For example, if your groups were defined under ou=groups,dc=sonatype,dc=com, this field would have a value of ou=groups.

This value in this field is a standard object class defined in RFC-2307. The class is simply a collection of references to unique entries in an LDAP directory and can be used to associate user entries with a group. Examples are groupOfUniqueNames, posixGroup or custom values.

Specifies the attribute of the object class that specifies the group identifier. If the value of this field corresponds to the ID of a role, members of this group will have the corresponding privileges.

Specifies the attribute of the object class which specifies a member of a group. An example value is uniqueMember.

This field captures the format of the Group Member Attribute, and is used by the repository manager to extract a username from this attribute. An example values is ${dn}.

If your installation does not use static groups, you can configure the LDAP connection to refer to an attribute on the user entry to derive group membership. To do this, select Dynamic Groups in the Group type drop down.

Dynamic groups are configured via the Group member of attribute parameter. The repository manager inspects this attribute of the user entry to get a list of groups of which the user is a member. In this configuration, seen in Figure: “Dynamic Group Element Mapping”, a user entry would have an attribute that would contain the name of a group, such as memberOf.

Once you have configured the user and group settings on the Choose Users and Groups form, you can check the correctness of your user mapping by pressing the Verify user mapping button. A successful mapping will result in the retrieval of a list of user records, which will be shown in the User Mapping Test Result dialog. Note that the user mapping result dialog is limited to 20 records. You can go to "security → users" in the administration UI and search in the LDAP realm to search for specific users and verify their information.

The repository manager provides you with the ability to test a user login directly. To test a user login, go to the Choose Users and Groups page after all appropriate field inputs of the form are filled. Scroll to the bottom and click the Verify login button.

The Verify login button can be used to check if authentication and user/group mappings work as expected for a specific user account besides the global account used for the LDAP configuration.

After the successful configuration of your LDAP connection and user and group mappings, you can proceed to configure external role mappings and assign them to users. This allows you to define the repository manager specific security for a LDAP group. More details are available in Roles and Users.

Full ability to view and edit this page is granted by the nx-ldap-all Privilege.  Granular privileges to read, update, create and delete are also available.  In order to Clear cache and Change order the update (or all) privilege is required.