Only available in Nexus Repository Pro. Interested in a free trial?  Start here.

Before using this task, you should consider a few things:

Create a new Repository - Import external files task and you will be presented with the configuration options listed below: 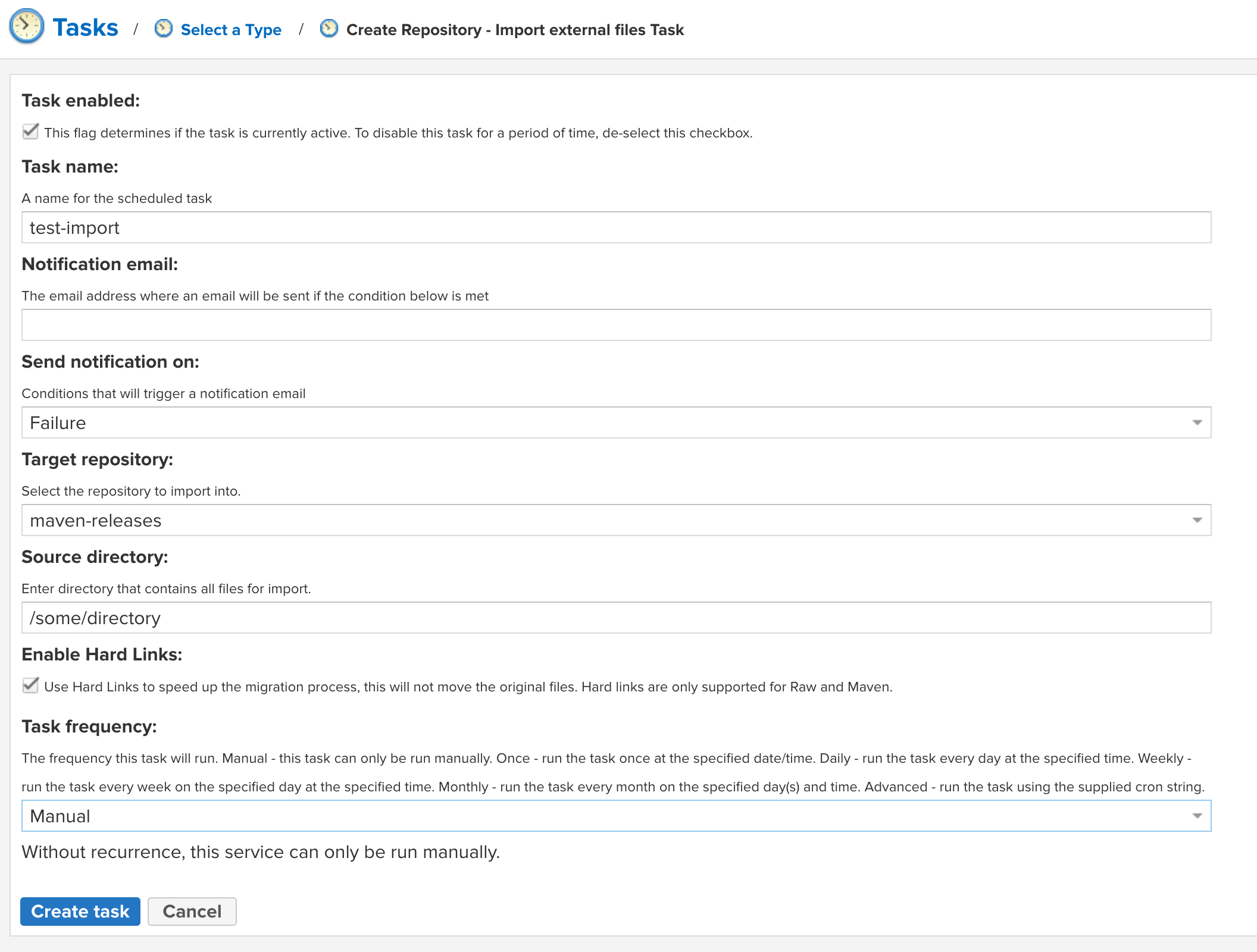 Important import-specific fields are as follows:

Target repository - The repository into which to import content. This list will only be popluated with Hosted repositories of the supported Formats (see format list below).

Files in this directory should be in a directory structure that supports the desired format (see format list below).

NEW IN 3.31 Enable Hard Links - For some formats (see Hard Link Support in table below), enabling this option will create hard links for the blobs in the source directory to be used in the target directory. A physical copy of the blobs will not be created in the target directory. This can save time if the source directory will continue to be accessible by the current instance. Ensure you have read the hard link requirements under Planning and Requirements.

When the task runs, it generates a .nexus/nxrm-export-import-task/ directory inside of the source directory. This .nexus/nxrm-export-import-task/ directory contains metadata that Nexus Repository uses for future imports so that it will not import content multiple times if the task is run more than once. This will allow you to keep placing content into this directory while only importing newer content if you run the task again.

As Nexus Repository processes the import, it will log every single file it imports to the task log; a new task log is created each time a task runs. If an error occurs with any particular file, Nexus Repository will simply log that fact, then continue importing the rest of the content.

If you need to reset the import data files, run the following command:

The following steps provide a workaround for deleting .dat files inside a Nexus Repository 2 storage directory where the .dat files are stored in a .nexus directory instead of .nexus/nxrm-export-import-task/:

You can import content into repositories of any format listed below. Some formats require that content be structured in a certain manner:

One way to use import when migrating from Nexus Repository 2 to 3 is to first set up a group repository with ap roxy to the source repository. This way, artifacts will be available immediately while you do the import. Once the import is done, you can remove the proxy to test that everything is available.

When importing from Nexus Repository 2 repositories, the task will also pull the date-/time-related attributes so that you can maintain the data in the new repository. These include the created date, last updated date, and the last downloaded date.

Import from Other Repository Managers