For developers using the Ruby programming language, the gem tool serves as their package management solution. In fact, since version 1.9 of Ruby, it has been included as part of the default Ruby library. Packages are called gems and, just like all package managers, this allows for ease of use when distributing programs or libraries.

Enter RubyGems hosted at rubygems.org - the most popular and leading gem hosting service supporting the Ruby community. Here, a large variety of open source Ruby projects supply their gems for download to all users.

Ruby has been a successful platform for developers for a long time now. The popularity of Ruby and therefore the usage of gems and gem repositories means that lots of teams are downloading and exchanging lots of components on a regular basis. Obviously, this can (and does) become a crunch on resources, not to mention a pain to manage.

The following features are included as part of the gem repository support:

None of this functionality requires Ruby (or any extra tooling) to be installed on the operating system running the repository manager. Ruby specific details are implemented using a bundled JRuby.

To reduce duplicate downloads and improve download speeds for your developers, continuous integration servers and other systems using gem, you should proxy the RubyGems repository and any other repositories you require.

To proxy an external Gem repository, like RubyGems, simply create a new Proxy Repository as documented in Managing Repositories. The Provider has to be set to Rubygems. The Remote Storage Location has to be set to the URL of the remote repository you want to proxy. The official URL for Rubygems.org is 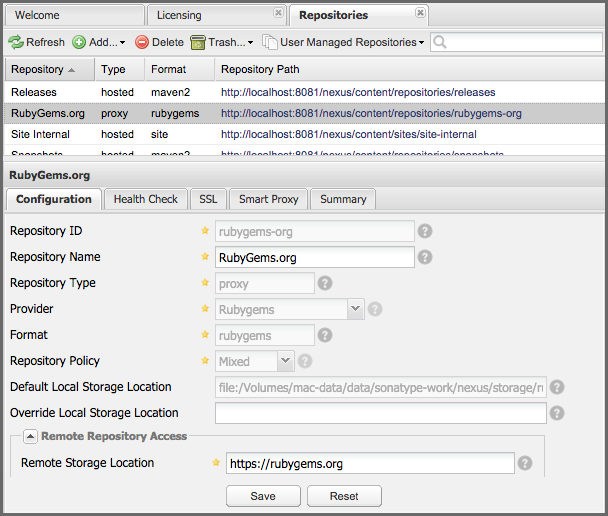 If you are using Nexus Repository Manager Pro and are proxying a repository via HTTPS, you can get the certificate added to the repository manager truststore to simplify management using the SSL tab of the repository configuration.

The Gem repository information is immediately updated as gems are pushed to the repository or deleted from it.

A scheduled task can be used to rebuild the metadata of a hosted gem repository and can be configured as documented in Managing Scheduled Tasks. 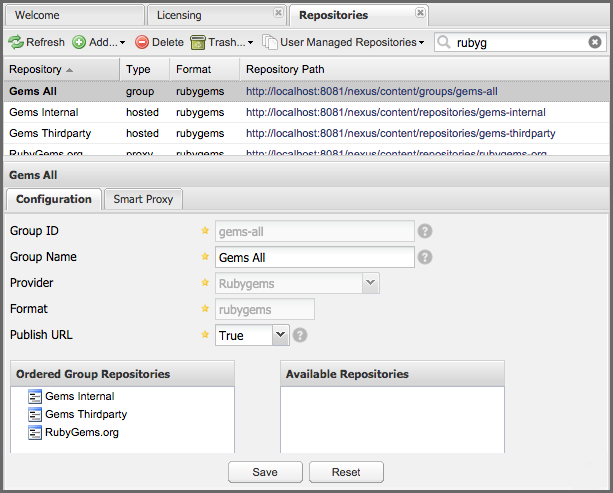 Using the Repository Path of the repository group as your Gem repository URL in your client tool gives you access to the gems in all three repositories with one URL.

Once you have configured the repository manager with the gem repository group, you can add it to your configuration for the gem command line tool.

In order to take full advantage of the repository manager and the proxying of gems, you should remove any other sources. By default https://rubygems.org/ is configured in gem and this can be removed with

Subsequently you should clear the local cache with

To check a successful configuration you can run

With this setup completed any installation of new gems with gem install GEMNAME (e.g. gem install rake) will download from the repository manager.

By default read access is available to anonymous access and no further configuration is necessary. If your repository manager requires authentication, you have to add the Basic Auth authentication details to the sources configuration:

If you are using the popular Bundler tool for tracking and installing gems, you need to install it with gem:

To use the repository manager with Bundler, you have to configure the gem repository group as a mirror:

With this configuration completed, you can create a Gemfile and run bundle install as usual and any downloads of gem files will be using the gem repository group configured as a mirror.

At this point you have set up the various gem repositories on the repository manager (proxy, hosted and group), and are successfully using them for installing new gems on your systems. A next step can be to push gems to hosted gem repositories to provide them to other users. All this can be achieved on the command line with the features of the nexus gem.

The nexus gem is available at RubyGems and provides features to interact with Nexus Repository Manager Pro including pushing gems to a hosted gem repository including the necessary authentication.

You can install the nexus gem with

After successful installation you can push your gem to a desired repository. The initial invocation will request the URL for the gem repository and the credentials needed for deployment. Subsequent pushes will use the cached information.

By default pushing an identical version to the repository, known as redeployment, is not allowed in a hosted gem repository. If desired this configuration can be changed, although we suggest to change the version for each new deployment instead.

The nexus gem provides a number of additional features and parameters. You can access the documentation with