RPM packages and the RPM package manager solution yum are used as the default application package manager on Linux based operating systems such as Red Hat, CentOS, Fedora, Oracle Linux, SUSE, openSUSE, Scientific Linux and others.

This enables a build and deployment pipeline for Java or other JVM-based applications via Maven repositories to Linux computers. E.g., a Java Enterprise Archive (EAR) or Web Archive (WAR) or some other application is deployed to a Maven repository. The deployment is performed by a CI server build using Maven or other build systems or as a manually run deployment. Once the repository manager hosts the application RPM package, it can be retrieved via yum for installation and updates on testing and production systems. The metadata of the RPM package can additionally trigger installation of other required packages including e.g. a Java runtime or an application server.

Yum support is bundled with Nexus Repository Manager Pro and Nexus Repository Manager OSS and no further installation steps are required. It relies on the commands createrepo and mergerepo to be installed on the operating system running the repository manager server and to be available on the path. Documentation about these commands can be found on the createrepo website. Typically createrepo is installed on RPM-based Linux distributions and as such they are suitable to run the repository manager with yum support. If desired the path to the commands can be configured in the user interface.

with a sufficiently privileged user.

Yum related configuration is done with the Capabilities management documented in Accessing and Configuring Capabilities.

The capability Yum: Configuration allows you to enable or disable yum support. It can only be enabled successfully, if the createrepo and the mergerepo commands can be found by the repository manager. By default it will look for them on the path. The configuration settings Path of "createrepo" and Path of "mergerepo"  allow you to alternatively configure a specific absolute path.

The parameter Max number of parallel threads defaults to ten and defines how many threads can be used to manage the yum repositories with the createrepo and the mergerepo commands.

You need to ensure that this capability is enabled, before proceeding with your repository specific configuration. The Status tab of the capability displays the detected versions for createrepo and mergerepo and details any problems as applicable.

To expose a Maven repository like Releases via yum, press the New button in the capabilities configuration tab and select Yum: Generate Metadata from the Type drop down in the dialog displayed in Figure 18.1, “Yum Configuration for the Hosted Releases Repository". 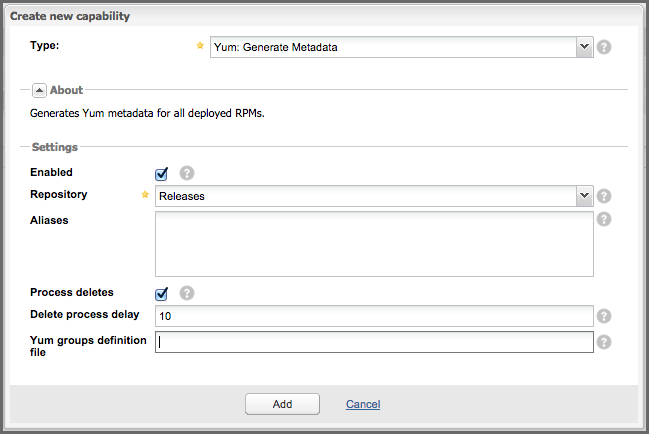 The yum integration supports versioned views on a repository. The URL http://localhost:8081/nexus/service/local/yum/repos/releases/1.2.3/ exposes a yum repository with all packages with version 1.2.3 in the releases repository. A custom repodata folder is available at the context.

The Aliases field can be used to define alternative access paths to specific versions. For example, you can configure alias values of

These values would in turn expose the version 1.2 under a URL like http://localhost:8081/nexus/service/local/yum/repos/releases/production/ and the version 2.0 at http://localhost:8081/nexus/service/local/yum/repos/releases/testing/. Using these URLs in the yum configuration on the target servers as a static URL enables upgrades to new versions by simply changing the alias e.g. to production=1.3 and running a yum update command on the target server.

Besides maintaining the aliases in the capability administration, it is possible to create or update an alias in the command line:

Usage of the alias-based URL is done via the normal yum configuration e.g. with a file /etc/yum.repos.d/nexus-production.repo and the following content:

By deploying new versions and switching alias associations to the versions, a controlled roll out of new versions of RPM archives to target servers can be achieved.

The configuration options Process deletes and Delete process delay can be used to enable updates to the yum metadata, following delete operations of rpm packages in the Maven repository.

The Yum groups definition file configuration allows you to configure a path to a package groups configuration file. This file is typically named comps.xml and can be used to define a group of RPM packages. The groups can then be managed with commands such as yum grouplist, yum groupinstall and yum groupremove.

Once the capability is saved, the Status tab displays an example yum configuration for accessing the repository. Each RPM deployed to the repository causes the repository manager to update the yum metadata immediately.

The metadata used by yum is available in the repodata context e.g., at …/nexus/content/repositories/releases/repodata, in the following files. Apart from the repomd.xml file, the files are prepended with a unique hash value as part of the name to avoid caching issues:

This XML file contains information about the other metadata files.

This zipped XML file describes the primary metadata of each RPM archive in the repository.

This zipped XML file describes all the files contained within each RPM archive.

The yum integration is able to proxy yum-enabled Maven repositories from remote Nexus Repository Manager servers. The metadata in these repositories contains absolute URLs, which will cause yum to use these URLs. The capability Yum: Proxy Metadata can be configured on such a proxy repository. It will cause the URLs in the metadata to be rewritten and corrected for the current repository manager.

This allows the proxy repositories to be part of a repository group and expose the correct yum metadata via the merged metadata creation on the group.

To expose a Maven repository group to yum, simply add a new capability with the type Yum: Merge Metadata and select the repository group in the Group drop down. Figure 18.2, “Yum Configuration for the Hosted Releases Repository” shows the Settings tab for the Public Repositories configured for yum.

The yum support includes a scheduled task called Yum: Generate Metadata that can be run to generate yum metadata with createrepo for a specific repository.

Typically this task does not need to be run, however it can be useful when RPM files already exist in a repository or are deployed in some external mode that requires a manually triggered update of the metadata.

The Optional Output Directory parameter can be used to get the metadata created in a different folder from the default repo-data in repository root.

The parameter Single RPM per directory is activated by default and causes the task to take only one RPM file per directory in the Maven repository into account when creating the yum metadata.

The component upload to a hosted repository allows you to publish any RPM file to a Maven repository and subsequently expose it via the yum integration. This is a basic use case, that can be used to e.g., exposed third-party supplied RPM archives. The more advanced setup involves a Maven project that creates the RPM as detailed in this section.

The RPM Maven Plugin can be used to create an RPM package of a Java application and attach it as a secondary built component with the attached-rpm goal. An example plugin configuration for a war project can be found below in "Maven pom.xml snippet for configuring and attaching an RPM".

Maven pom.xml snippet for configuring and attaching an RPM

Now that the repository manager hosts a RPM package with your Java web application in a yum repository, you can configure yum on the target server to retrieve it for installation. You have to configure yum to include the repository as a package source. Depending on your specific Linux distribution, file paths and tools for this configuration will differ. A typical example would be to create a new file e.g. nexus.repo in /etc/yum.repos.d. A sample configuration for the public group can be found in "Example yum source repository configuration".

Once the configuration is added you can install or update any RPM packages from the repository manager as usual with yum install <packagename> or yum update <packagename>. This includes any required dependencies like a servlet container or a Java runtime as declared in the RPM Maven Plugin configuration and therefore the RPM/yum metadata.

Available in Nexus Repository Pro only

The Staging Suite of Nexus Repository Manager Pro can be used with yum repositories allowing you to optimize the release process for your RPM packages.

The capability Yum: Staging Merge Metadata can be used to configure yum metadata creation for a build promotion profile and the attached repository groups.