Nexus Repository Manager uses a role-based access control (RBAC) system that gives administrators very fine-grained control over who can read from a repository (or a subset of repositories), who can administer the server and who can deploy to repositories. The security model in the repository manager is also so flexible as to allow you to specify that only certain users or roles can deploy and manage components in a specific repository under a specific groupId or asset class. The default configuration of Nexus Repository Manager ships with four roles and four users with a standard set of permissions that will make sense for most users. As your security requirements evolve, you’ll likely need to customize security settings to create protected repositories for multiple departments or development groups. Nexus Repository Manager provides a security model which can adapt to any scenario. The security configuration is done via menu items in the Security submenu in the left-hand main menu.

The RBAC system is designed around the following four security concepts:

Privileges are rights to read, update, create, or manage resources and perform operations. The repository manager ships with a set of core privileges that cannot be modified, and you can create new privileges to allow for fine-grained targeting of role and user permissions for specific repositories.

Users can be assigned roles and will model the individuals who will be logging into the repository manager and reading, deploying or managing repositories.

You can access the configuration of privileges via the Privileges menu item in the Security submenu in the left-hand main menu.

The repository manager has three types of privileges:

Behind the scenes, a privilege is related to a single REST operation and method like create, update, delete, read. 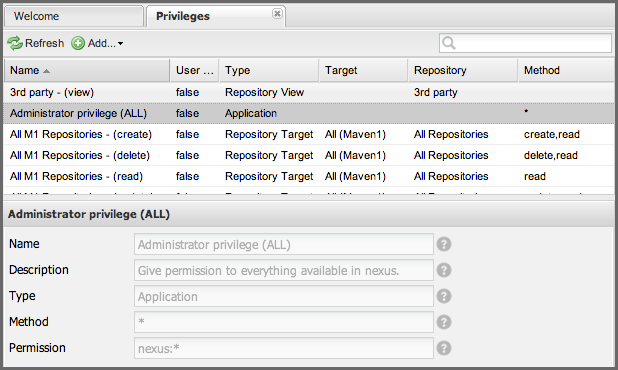 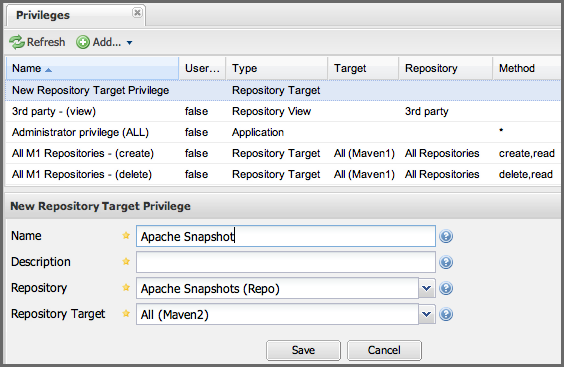 Once you create a new privilege, it will create four underlying privileges: create, delete, read and update. The four privileges created by the form in Figure 6.27, “Creating a New Repository Target Privilege” are shown in Figure 6.28, “Create, Delete, Read, and Update Privileges Created”. 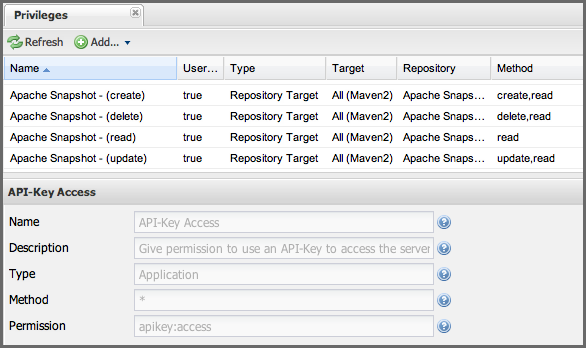 A Repository Target is a set of regular expressions to match on the path of components in a repository (in the same way as the routing rules work). Nexus Repository Manager is preconfigured with a number of repository targets and allows you to create additional ones. Access the management interface visible in Figure 6.29, “Managing Repository Targets” via the Repository Targets menu item in the left-hand Views/Repositories sub-menu. 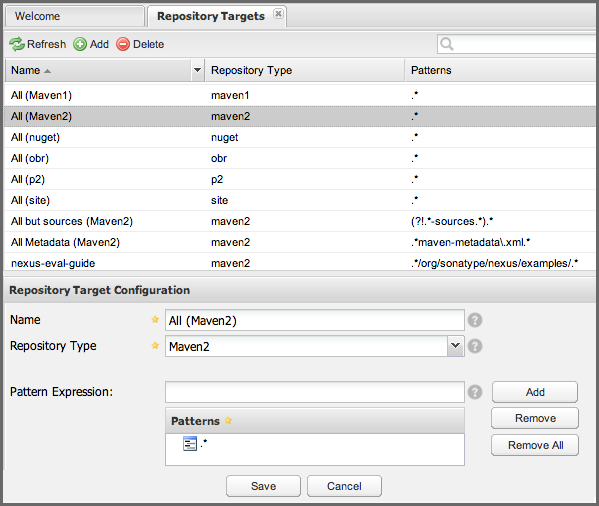 A pattern that would capture more components like all components with any part of the path containing maven could be .*maven.*.

The regular expressions can also be used to exclude components as visible with the pattern (?!.*-sources.*).* in Figure 6.30, “Excluding Source Components from a Repository Targets” where components with the qualifier -sources are excluded. The syntax used for the expressions is the Java syntax, that is similar but not identical to the Perl syntax. 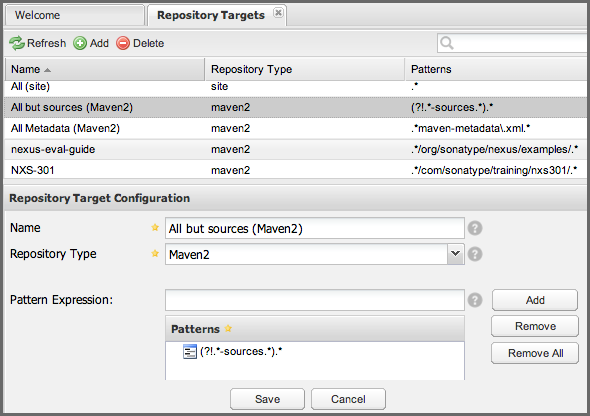 By combining multiple patterns in a repository target, you can establish a fine-grained control of components included and excluded.

Once you have created a repository target, you can utilize it as part of your security setup. You can add a new privilege that relates to the target and controls the CRUD (Create, Read, Update and Delete) operations for artifacts matching that path. The privilege can even span multiple repositories. With this setup you can delegate all control of components in org.apache.maven to a "Maven" team. In this way, you don’t need to create separate repositories for each logical division of your components.

Repository targets are also be used for matching components for implicit capture in the Staging Suite as documented in Staging Releases.