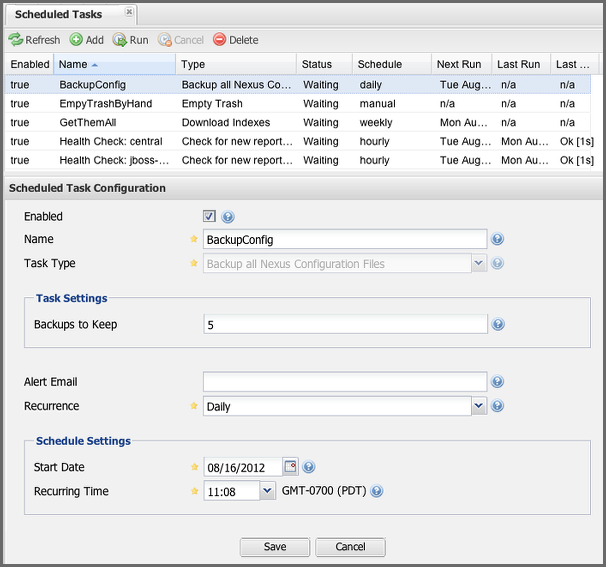 The list interface allows you to Add new tasks and Run, Cancel and Delete existing tasks as well as Refresh the list with respective buttons above the list.

When creating or updating a scheduled task, you can configure the following properties:

Enable or disable a specific task

Specify the type of action the scheduled task executes. The list of available task types is documented in more detail below.

Configure the task settings specific to the selected task type. Tasks affecting a repository have a setting called Repository/Group that allows you to let the task affect all repositories and groups or only a specific one.

Configure the schedule for the task executions. Available choices are Manual, Once, Hourly, Daily, Weekly, Monthly and Advanced. All choices provide a custom user interface for scheduling the specific recurrence. Weekly scheduling requires at least one day of the week to be selected. The Advanced setting allows you to provide a CRON expression to configure more complex schedules.

The following kinds of scheduled task types are available:

This scheduled task causes the repository manager to download indexes from remote repositories for proxied repositories. The Download Remote Indexes configuration also needs to be enabled on the proxy repository.

The Evict and Purge actions do not delete data from the repository manager working directory. They simply move data to be cleared or evicted to a trash directory under the work directory. This task deletes the data in this trash directory older than the number of days specified in the task setting Purge items older than  (days).

This scheduled task tells the repository manager to delete all proxied items that haven’t been "used" (referenced or retrieved by a client) in a number of days as specified in Evict items older than (days). This can be a good job to run if you are trying to conserve storage space and do not need all of the components in the future e.g., to reproduce old builds without renewed retrieval. This is particularly useful for a personal repository manager deployment with a large change rate of components combined with limited diskspace.

The P2 plugin allows you to mirror Eclipse update sites. This task can be used to force updates of repositories that went out of sync.

Just as Maven downloads an index from a remote repository, the repository manager can publish an index in the same format. This will make it easier for people using m2eclipse or Nexus Repository Manager to interact with your repositories.

The repository manager maintains a lot of data that relates to the interaction between itself, proxied remote repositories and clients. While this information can be important for purposes of auditing, it can also take up storage space. Using this scheduled task you can tell the repository manager to periodically purge this information. The setting Purge Items older than (days) controls the age of the data to be deleted.

This scheduled tasks will delete old, unused API keys generated and used by various plugins. For example, it should be scheduled when using the User Token feature or NuGet repositories. It will purge orphaned API keys e.g., after users reset their token and should be scheduled to run regularly, specifically when internal security policies for password resets and you are using an external security provider like LDAP with this requirement for resets to access the repository manager.

This task will rebuild the maven-metadata.xml files with the correct information and will also validate the checksums (.mh5/.sha1) for all files in the specified Repository/Group. Typically this task is run manually to repair a corrupted repository.

If you are using NuGet, pushing your components into a NuGet hosted repository and are proxying that repository to other users, this task can be used to rebuild the feed.

These tasks can be used to rebuild the metadata or the full repository with a P2 format. You can specify a Repository/Group or a Repository Path to determine which content to affect.

This task was used to repair checksums and should only be used upon specific advise from Sonatype support.

In many use cases of a repository manager, it is necessary to keep release components for long periods of time or forever. This can be necessary for reproducibility reasons, in order to ensure users have access to old versions or even just for audit or legal reasons. However, in other use cases, there is no value in keeping old release components. One example would be a when using a continuous delivery approach onto a single deployment platform with no roll back support. In other cases, it could also be impractical due to the mere number and size of the release components.

To configure the task, you specify the repository where release components are to be deleted as well as the number of component versions to keep for a specific groupId and artifactId coordinate. The task generates a list of all versions of a component for each groupId and artifactId coordinate combination and sorts it according to the version number. The ordering is derived by parsing the version string and supports semantic versioning with additional semantics for specific classifiers. Further details can be found in the documentation for the implementing class  GenericVersionScheme .

Optionally, the Repository Target parameter can be used to narrow down the content of the repository that is analyzed, to determine if any deletion should occur. Choosing All(Maven2) is suitable to cause all Maven 2-formatted repositories to be analysed. If you want to only target a specific groupId and artifactId combination or a number of them you can create a suitable repository target as documented in Section 6.14, “Managing Repository Targets” and use it in the configuration of the scheduled task.

Often, you will want to remove snapshots from a snapshot repository to preserve storage space. This task supports this deletion for time stamped snapshots as created by Maven 3.x in a deployment repository. Note that configuring and running this job is not enough to reclaim disk space.

This configuration option allows you to specify a minimum number of snapshots to preserve per component. For example, if you configured this option with a value of 2, the repository manager will always preserve at least two snapshot components. A value of -1 indicates that all snapshots should be preserved.

This configuration option allows you to specify the number of days to retain snapshot components. For example, if you want to make sure that you are always keeping the last three day’s worth of snapshot components, configure this option with a value of 3. The minimum count overrides this setting.

If enabled and a released component with the same GAV coordinates is detected all snapshots will be removed.

This parameter allows you to specify a number of days before released snapshots are purged. If a release associated to a snapshot has an updated timestamp and falls within the set grace period, it will not be purged. This setting will give the respective project that references the snapshot dependency time to upgrade to the release component or the next snapshot version.

If you want to have components deleted directly rather than moved to the trash, you can enable this setting.

When doing regular deployments to a snapshot repository via a CI server, this task should be configured to run regularly.

This service synchronizes a shadow (or virtual) repository with its master repository. This task is only needed when external changes affected a source repository of a virtual repository you are using.

The metadata for a yum repository is created and maintained by the createrepo tool. This scheduled task allows you to run it for a specific repository and optionally configure the output directory.

Beyond these tasks any plugin can provide additional scheduled tasks, which will appear in the drop-down once you have installed the plugin.

The Evict and Purge actions do not delete data from the repository manager working directory. They simply move data to be cleared or evicted to a trash directory under the work directory. If you want to reclaim disk space, you need to clear the Trash on the Browse Repositories screen. If something goes wrong with a evict or clear service, you can move the data back to the appropriate storage location from the trash. You can also schedule the Empty Trash service to clear this directory on a periodic basis.

In order to keep the heap usage in check it is recommended that you schedule an "optimize indexes" task to run weekly. A number of other maintenance tasks should also be scheduled for production deployments.