Nexus Repository Manager ships with a large number of roles predefined including Nexus Administrator Role, Nexus Anonymous Role, Nexus Developer Role, and Nexus Deployment Role. Click on the Roles menu item under Security in the main menu to show the list of roles shown in Figure 6.31, “Viewing the List of Defined Roles”. 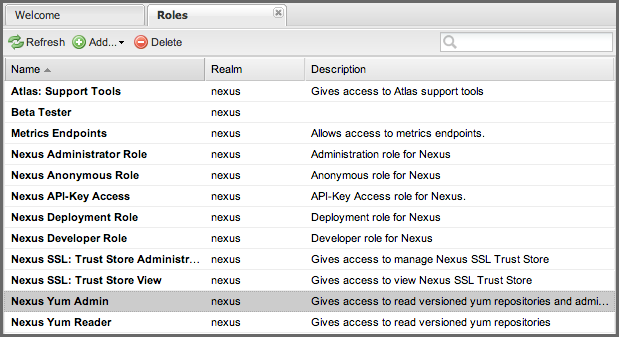 When creating a new role, you will need to supply a Role ID, a Name and a Description. Roles are comprised of other roles and individual privileges. To assign a role or privilege to a role, click on Add button under Role/Privilege Management to access the Add Roles and Privileges dialog displayed in Figure 6.33, “The Dialog to Add Roles and Privileges”. It allows you to filter the paged displayed of all the available roles and privileges with a filter text as well as narrowing the search to roles or privileges only. Using the filter and the paging you will be able to find the desired role or privilege quickly.

Figure 6.33. The Dialog to Add Roles and Privileges

The built-in roles are managed by Nexus and cannot be edited or deleted. The role confirguration section below the list is visible but disabled for these roles.

A role is comprised of other roles and individual privileges. To view the component parts of a role, select the role in the Roles list and then choose the Role Tree tab as shown in Figure 6.34, “Viewing a Role Tree”. 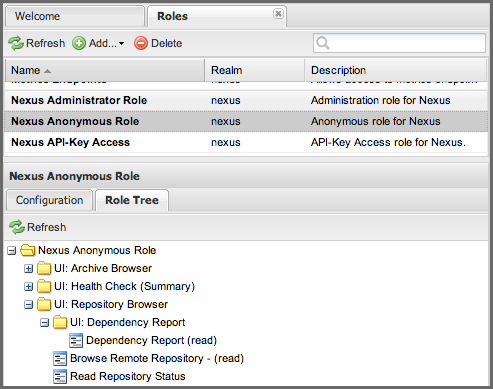 With the Repository Targets, you have fine-grained control over every action in the system. For example, you could make a target that includes everything except sources (.*(?!-sources)\.*) and assign that to one role while giving yet another role access to everything. Using these different access roles e.g., you can host your public and private components in a single repository without giving up control of your private components.