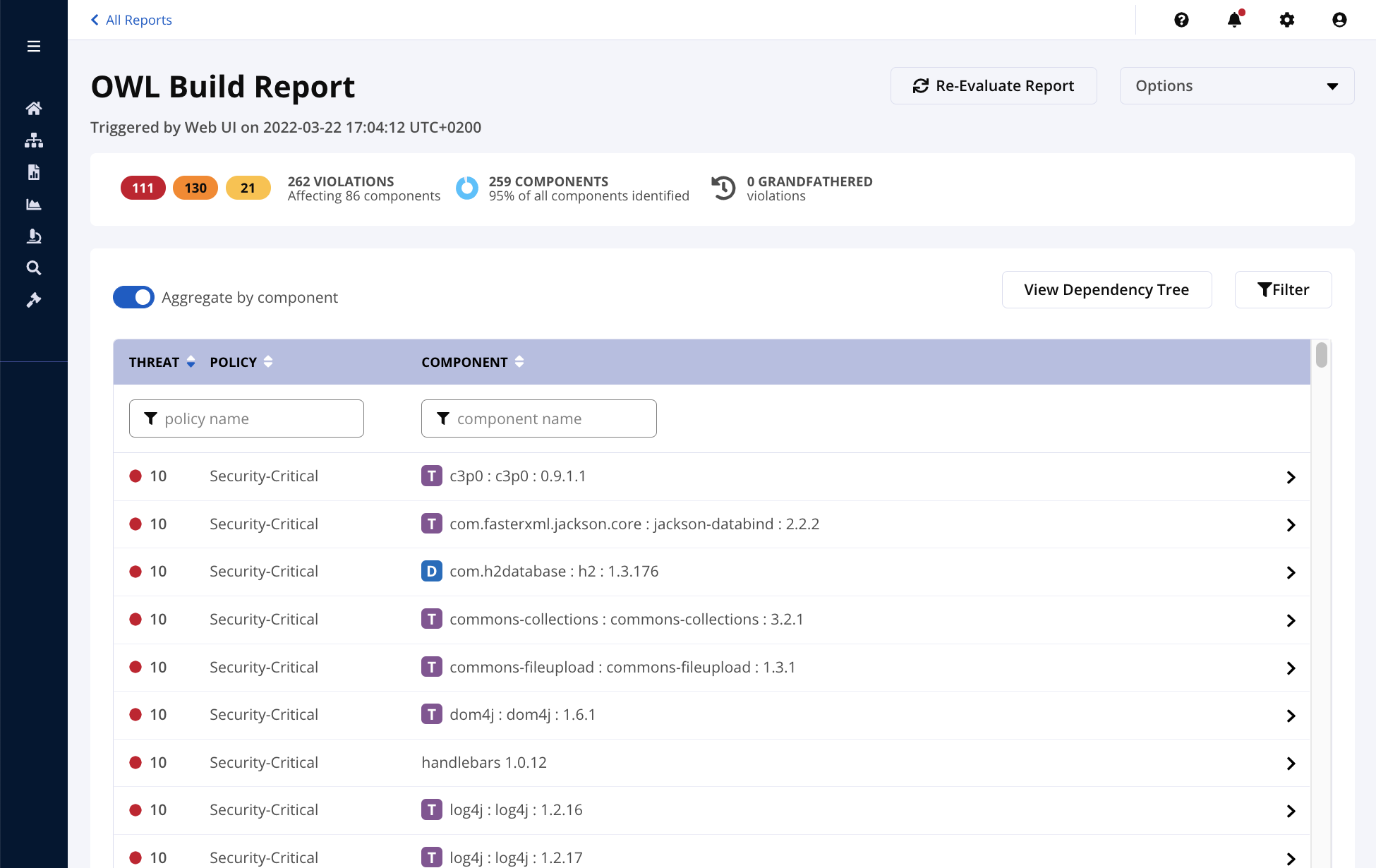 The Application Composition Report has several sections: a summary, a Policy Violation Table along with a Filter Sidebar, a Raw Data View, and a Vulnerabilities List view.

It’s important to first understand a little bit about what a report represents and the basic sets of data it contains. In general, each report:

Now that you know what forms the basis of the report, let’s take a look at each section individually.

The Summary section is displayed at the top of the main content area of the report. It consists of the report title and date as well as several displays of high-level statistics:

IQ versions 64 and older featured an older version of the Application Composition Report which had a statistics visualization that was very similar to this one but which counted differently.  While this visualization counts violations, the older one counted violating components. 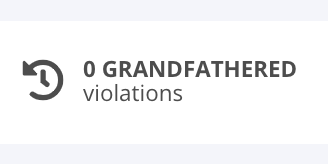 This display indicates the number of violations that have been grandfathered in this report.

The Policy Violations table displays a list of all components found during the scan of the application. By default, components are ordered by their worst policy violation. This is an important distinction, because a component may have more than one violation, and the threat level severity for those violations could vary. If you wish to see all violations there are two options, using the Aggregation toggle described below, or the Component Details Page. The Policy Violations table includes the ability to sort by threat level, policy name, and component name, as well as the ability to filter via the policy name and the component name. Clicking on a row for a component displays the Component Details Page.

The dependency type indicators are auto-generated in the Application Composition Report. They are represented as shown below:

Direct dependency: An external component or package you use in your application.

Transitive dependency: An external component or package required by other components or packages in the application, to execute successfully.

Innersource dependency: A component or package developed internally, for reuse within the organization.

Table below indicates the sources used to obtain the dependency information.

How dependencies are evaluated:

Maven: Dependencies will be evaluated when you run scans using

NPM: Dependencies will be evaluated for scans that contain the package.json and package-lock.json files in the same scan target.

SBOM: Dependencies will be evaluated using the SBOM files that contain tag/attribute "Dependencies"

For maven components, if the clm-maven-plugin is not used,

At the top right of the Application Composition Report is a Filter button.

Click the Filter button to filter the report by the constraints shown above.

To see all violations that have been waived, turn off the Aggregate by component, click the Filter button, open the Violation State chevron, and check the box marked Waived.

By default, the policy violations are presented in an "aggregated" view.  Click the switch to turn this behavior off.

When aggregated, components only appear on the list once under their highest policy violation. If a component has no violations, or all of its violations are waived or grandfathered, then it is displayed in a row with a policy name of "None" and a threat level of zero. However, if a component has multiple violations and only one or some have been waived or grandfathered, it will still appear under its highest remaining policy violation.

The Raw Data View can be accessed via the Options drop-down at the top of the Summary Section.  It is a way to view the raw, lower-level data that resulted from the analysis performed by Sonatype's Hosted Data Services.  The Raw Data View does not include information that is the result of policies configured within IQ. 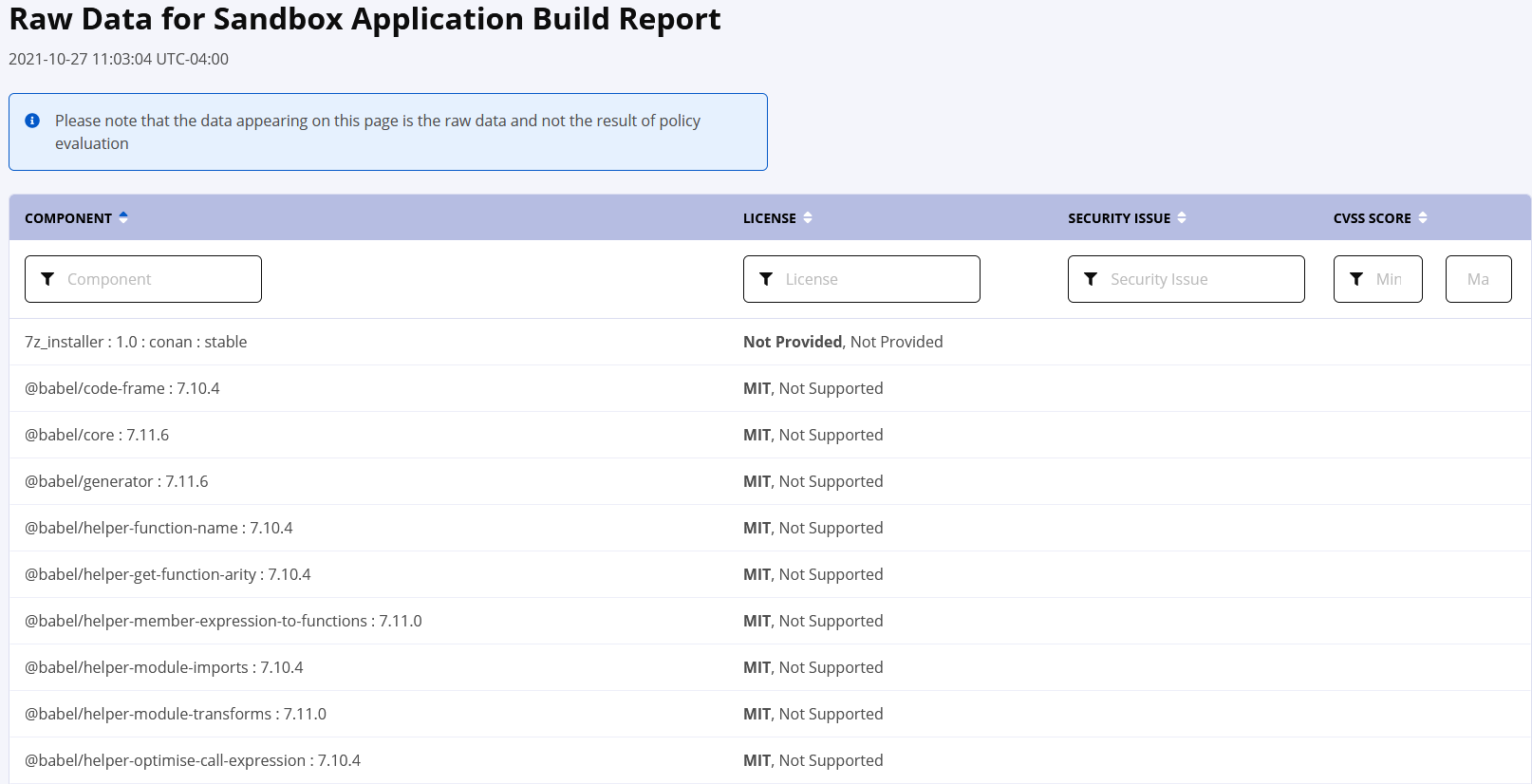 The view consists of a table that displays all components found within the application.  For components that could be identified, the component identifier (e.g. maven coordinates) is displayed. Otherwise, the component's file path within the application is displayed.  For identified components, Additional columns display the declared and observed software licenses, the identifier of any security vulnerability known for that component, and the CVSS score (severity) of that security vulnerability.  If a component has multiple known vulnerabilities it is given multiple rows in the table, one for each. An important thing to remember about this page is that information displayed here is related specifically to license and security vulnerabilities data that has been collected by Sonatype. This data however, is separate from policy violations, which are based on policies that you have created (or imported), and which are displayed in the Policy Violations Table. That is, you could certainly have a situation where there is a security vulnerability, and no policy violation. Because of this, it is important to treat them independently.

To sort the list, simply click the corresponding header. For example, if we wanted to sort by component name, finding a component with multiple vulnerabilities, we would click on the Component column. Additionally, you can search for a specific component by typing in the search field located directly below each header.

The security vulnerability identifiers displayed in the Security Issue column are clickable.  When clicked, they open a modal window which displays details about the vulnerability as shown below: 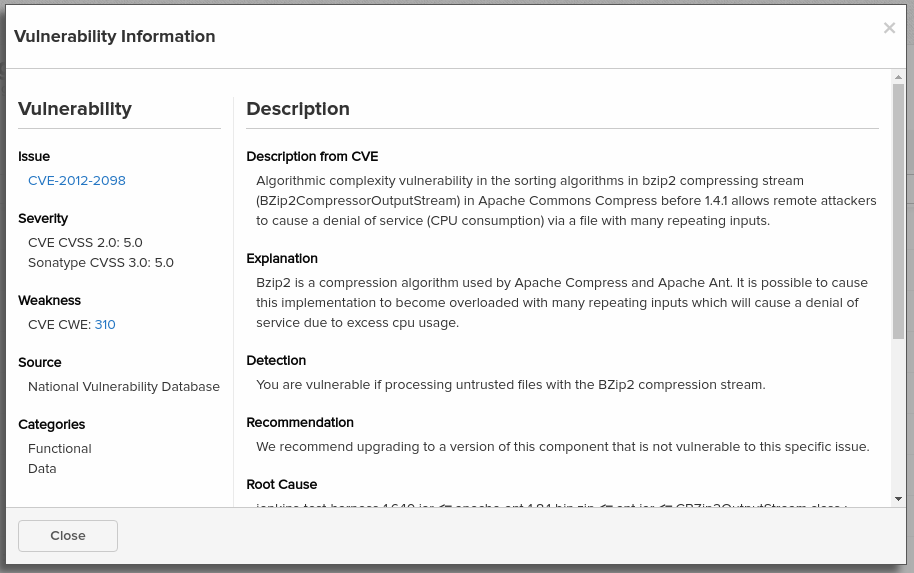