Nexus Lifecycle for Source Control Management (SCM) is a set of features that lets developers gain early insight into code changes by working in tandem with continuous integration to push policy information about an application’s components directly into their SCM.

Currently, Nexus Lifecycle for SCM has the following features:

In today’s software development lifecycle (SDLC), developers are asked to release complex software at an increasingly faster pace. Because of this, devs are relying more and more on OSS, utilizing openly available, popular components rather than writing unique code. Consequently, Sonatype’s State of the Software Supply Chain found that open-source software (OSS) components make up more than 80% of most modern applications. With this, the traditional capacity of a developer simply writing code has shifted to a holistic role that includes assembling and integrating code that supports both your software and business operations.

While assembling code, developers often use source control management systems, like GitHub, GitLab, and Bitbucket. SCMs are often the first place where a piece of code gets shared and reviewed by both humans and machines. Nexus Lifecycle for SCM uses Nexus Lifecycle to establish a relevant policy configuration. Scan evaluations in SCM are run against that policy configuration so that as developers build applications, they receive accurate and timely information to take action on reported violations.

The main value of SCM systems is their ease of collaboration. Developers are able to push quality control of their application development to a source control platform, where this collaboration exists in code reviews that contain both commits and pull requests.

Building on this, Nexus Lifecycle for SCM provides suggested remediations for policy violations directly into the source control repository. We do this by automatically creating pull requests with the changes to an application’s component manifest. Using this type of early feedback and automation, we reduce rework and keep development teams focused on contributing business value rather than managing application component risk.

How Lifecycle for SCM Works

To use Nexus Lifecycle for SCM, you first need to configure the IQ Server to allow access to your company’s Source Control Management platform. For large organizations, we recommend enabling automatic source control which lets CI and CLI integrations configure application source control connections when running from a locally cloned repository (a common practice in CI systems).

Once configured, commits will immediately receive automated commit feedback. If enabled and appropriately configured, applications will also start seeing automated pull requests for any new policy violation with suggested remediation, and pull request comments that detail the summary of violations, affected components, and a description of the violations that were introduced in the PR.

A Continuous Integration system or build agent is required for these features to work. For example, if Jenkins is pulling and running the scan, Nexus Lifecycle can pick up the source control context and use that as a source. This eases control and gets policy information closer to developers.

When deploying Lifecycle for SCM, you should authorize Nexus Lifecycle at the Root Organization level to communicate with your SCM tool (example: GitHub). Then, when you do any evaluation, we will look at the context in modern CI systems—meaning your Git repo gets cloned, then we run an evaluation in that directory, and we can get that information and see what was cloned. This lets us associate GitHub projects to applications in Nexus Lifecycle.

Using this example, you will be able to:

Once you’ve finished up the configuration, it’s time to kick off a build of your npm application. When you do so, the following workflow takes place:

Note: Verify your Jenkinsfile contains the environment {HOME = '.'} shown in the example above. Your docker npm commands may fail without this.

2. A policy violation is found for the react-dom 16.0.0 component. We also see that there is a newer version available we can replace it with. 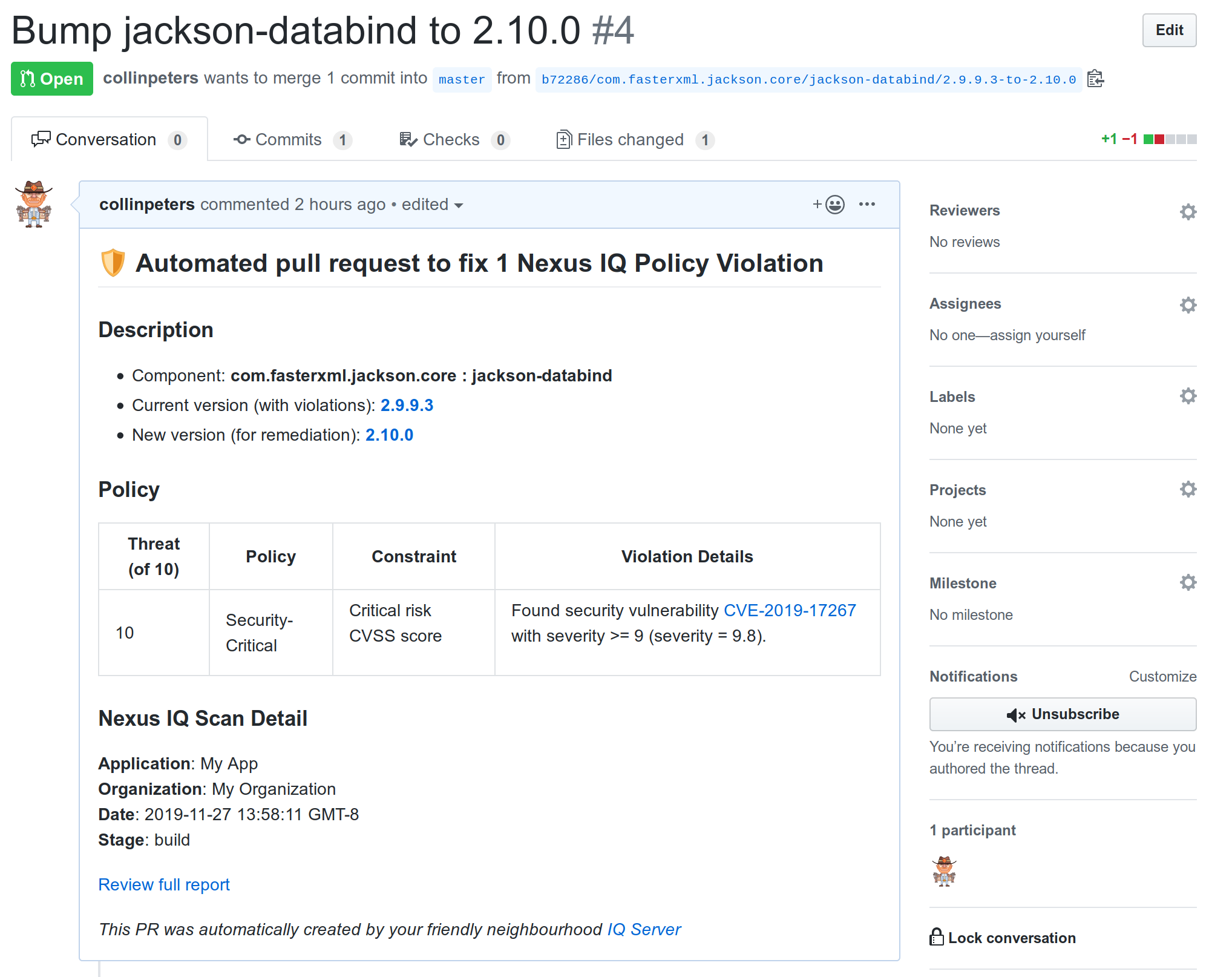 Nexus Lifecycle for SCM always bumps to a specific version, and pins it in your manifest. Only pinned versions give you control on remediation through security and quality policies. For example, version 1.3.7 might pass policy, but version 1.3.8 might not. A version range of ~1.3.0 does not allow this type of control—we don’t want to replace one security violation with another. For more details, see our IQ for SCM help docs.

The example workflow is shown here used GitHub, Jenkins CI, and an npm project. We encourage you to utilize other systems you have in place to work well with our software.

Success can be measured by a reduction in mean time to resolution (MTTR) which can be seen in our success metrics. Nexus Lifecycle for SCM provides the ability to prevent new violations from entering your main branch by informing development teams of risk as soon as they introduce it. We use automation to fix any violations as they occur by providing pull requests with the version change, and both of these practices should reduce MTTR.

If you’re ready to start using Nexus Lifecycle for SCM features, reach out to your customer success representative for guidance.

Visit this documentation on our Help website for step-by-step instructions.