Lifecycle component analysis is supported in the following JetBrains IDEs:

IntelliJ IDEA is a fully-featured integrated development environment (IDE) used for Java development. WebStorm is an IDE for the JavaScript ecosystem.

Sonatype Nexus IQ plugin is available for download on the JetBrains marketplace or via the Sonatype Plugin Download Link.

IQ for IDEA supports installation via a zip file from disk. Installation is performed similarly to other plugins, using the Settings/Preferences dialog. Click on Plugins from the left-hand pane to expose the option to install the plugin from disk. From there, browse to the plugin zip file and select it.

Remember to restart your IDE before continuing to access the plugin.

After the successful installation of IQ for IDEA, the plugin must be configured to connect to IQ Server. The configuration can be accessed via the Settings/Preferences dialog. Expanding Other Settings in the left-hand pane will reveal Nexus IQ. Click on Nexus IQ to set up the plugin for IQ Server. 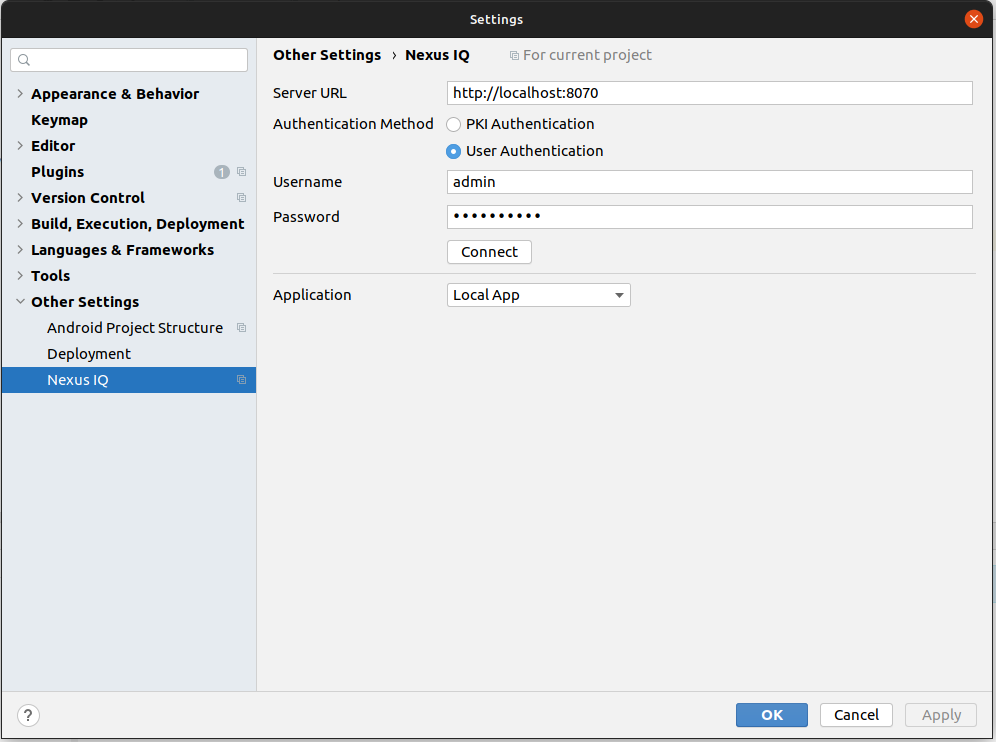 Once the IQ Server information is provided, click Connect to verify the connection to IQ Server. If it works, select an application from the dropdown. The policies for the application will be used when evaluating your IDE project.

If Connect reports an HTTP error:

The IQ for IDEA tool window can be accessed by clicking the Nexus IQ tab on the bottom tool strip of IDEA. If not accessible from there, it should also be available in View under Tool Windows.

Once configured and the component analysis is completed a component view will look similar to the example is shown in the image below. The list of components will reflect an analysis of the project’s dependencies. For Java projects that include all project libraries. For JavaScript projects, it includes all dependent Node modules. For Python projects, it includes all Python packages installed in the virtual environment associated with the project. For mixed projects, which could combine Java, JavaScript, and Python modules, the component list will contain a mix of Java, JavaScript and Python dependencies, if such dependencies are detected.

By default, all project dependencies are included in the component list. Scope filters can be applied to adjust which components are visible.

The following scopes are available:

Right-clicking on any component will bring up a menu of actions. All components allow for the following actions: View Details and Find Usages. Maven-based Java components show an extra action: Open Maven POM.

Many Python components come in several flavors. The same component, identified by name and version, can be built and packaged in several ways, having different sets of attributes and file extensions, and targeting different platforms. For instance, the same package can be found as a TGZ file for Linux and as a ZIP file for Windows. The content of those component flavors is sometimes different, so they could be exposed to different vulnerabilities. For that reason, the IQ for IDEA plugin will display all known flavors of a Python component in a separate side panel, so developers could check each of them individually.

The Nexus IQ plugin for IntelliJ IDEA can detect and analyze components written in different programming languages, within a single project. The project should be organized to follow the JetBrains recommended project structure.

IntelliJ IDEA project structure consists of projects and modules. A project can contain source code, tests, libraries in use, build instructions, and configuration files. It may contain one or more modules. Each module is a collection of project files that serve a single purpose. If no modules are defined for the project, the project itself is considered as a module.

At the time of new module creation, select a language e.g. Java and an optional build system e.g. Maven. IntelliJ IDEA will use this language selection to determine the specific features of the IDE that will be available for this module. This is a 1:1 association and works only for a single language. 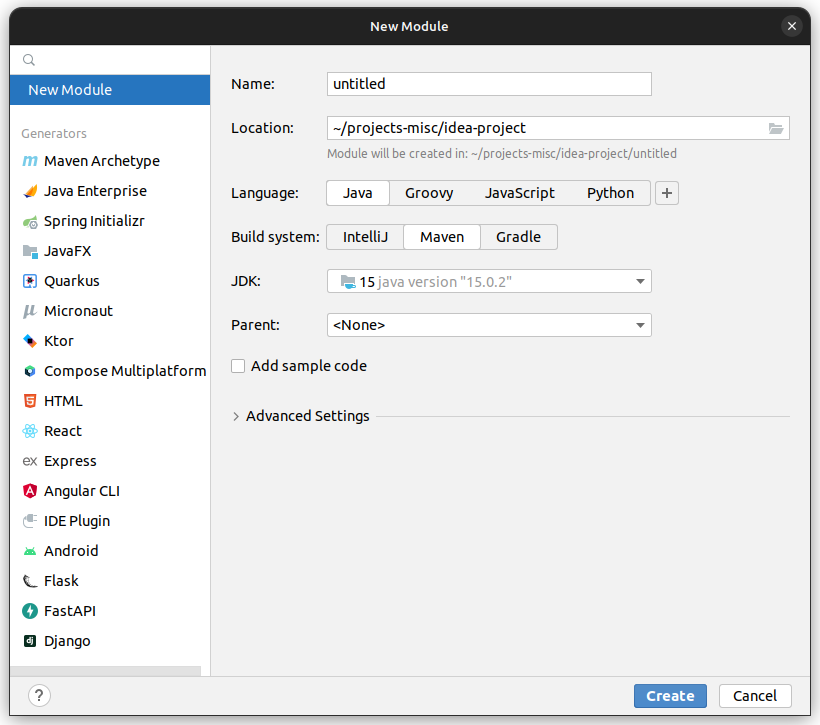 When an existing project is imported into IntelliJ IDEA, the IDE detects all the modules it contains and assigns a language to each module. You can modify the module detection and structuring after import by navigating to File > Project Structure.

To maximize the results of Nexus IQ for IDEA component detection in multi-language projects, ensure that each module contains files specific to a single language.

A web application has Node.js frontend and a Maven/Java backend. The project should be organized into at least one Node.js module and at least one Maven/Java module. No module should contain both Java and JavaScript files.

As shown below, Nexus IQ for IDEA detects both Java and JavaScript components. 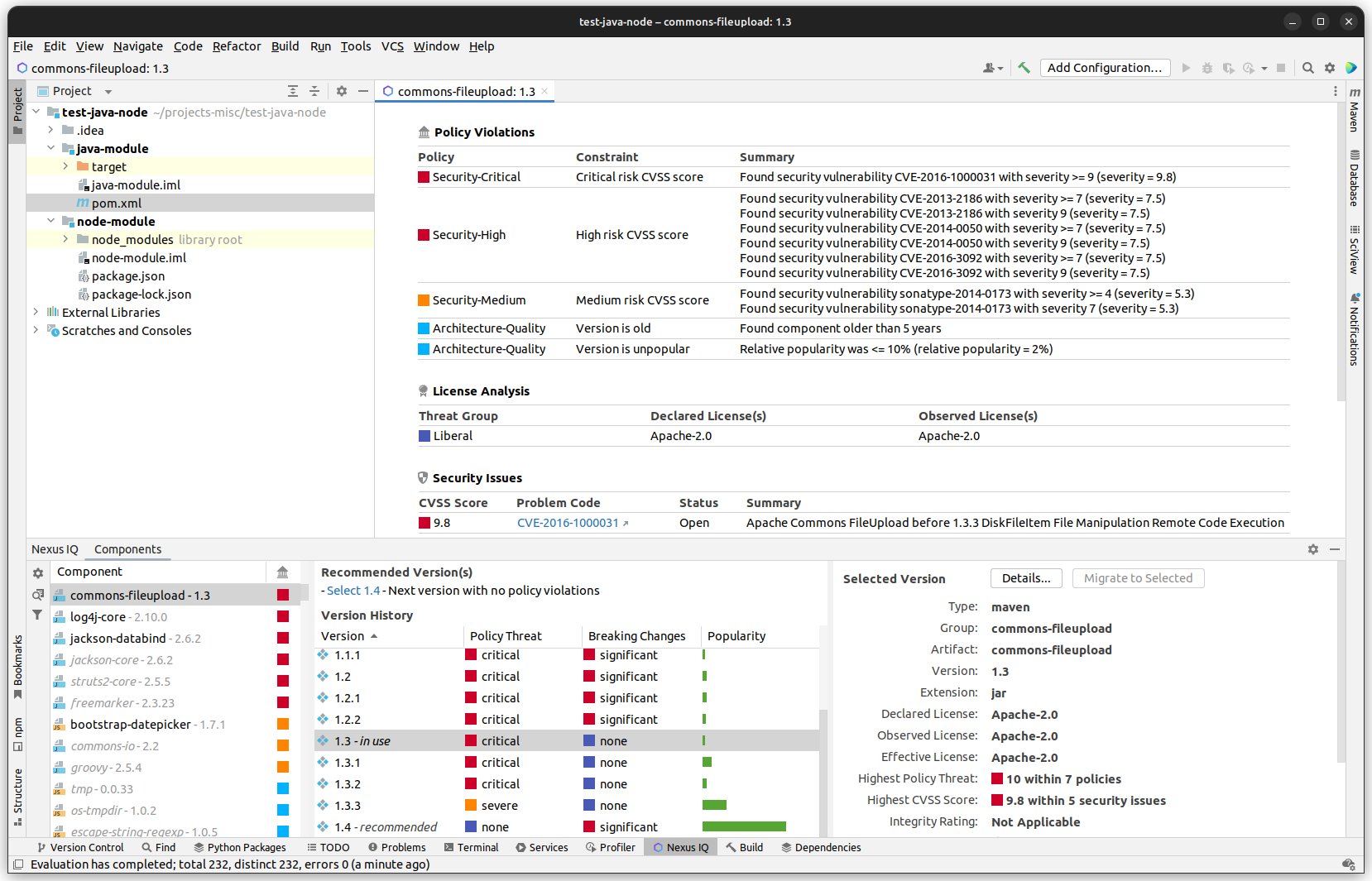 NOTE: IntelliJ IDEA associates only one language with a module, even if the module contains files of different languages. Nexus IQ for IDEA follows this language association and detects the components of that language only. For e.g. if IntelliJ IDEA has associated Java with a module that contains both Java and JavaScript files, then Nexus IQ for IDEA will detect Java components only.

In Maven or Gradle-based projects, when a project is first opened in the IDE, it is possible that it was not imported for the project type (maven or gradle). The symptom for this condition is an empty External Libraries folder in the Project view: 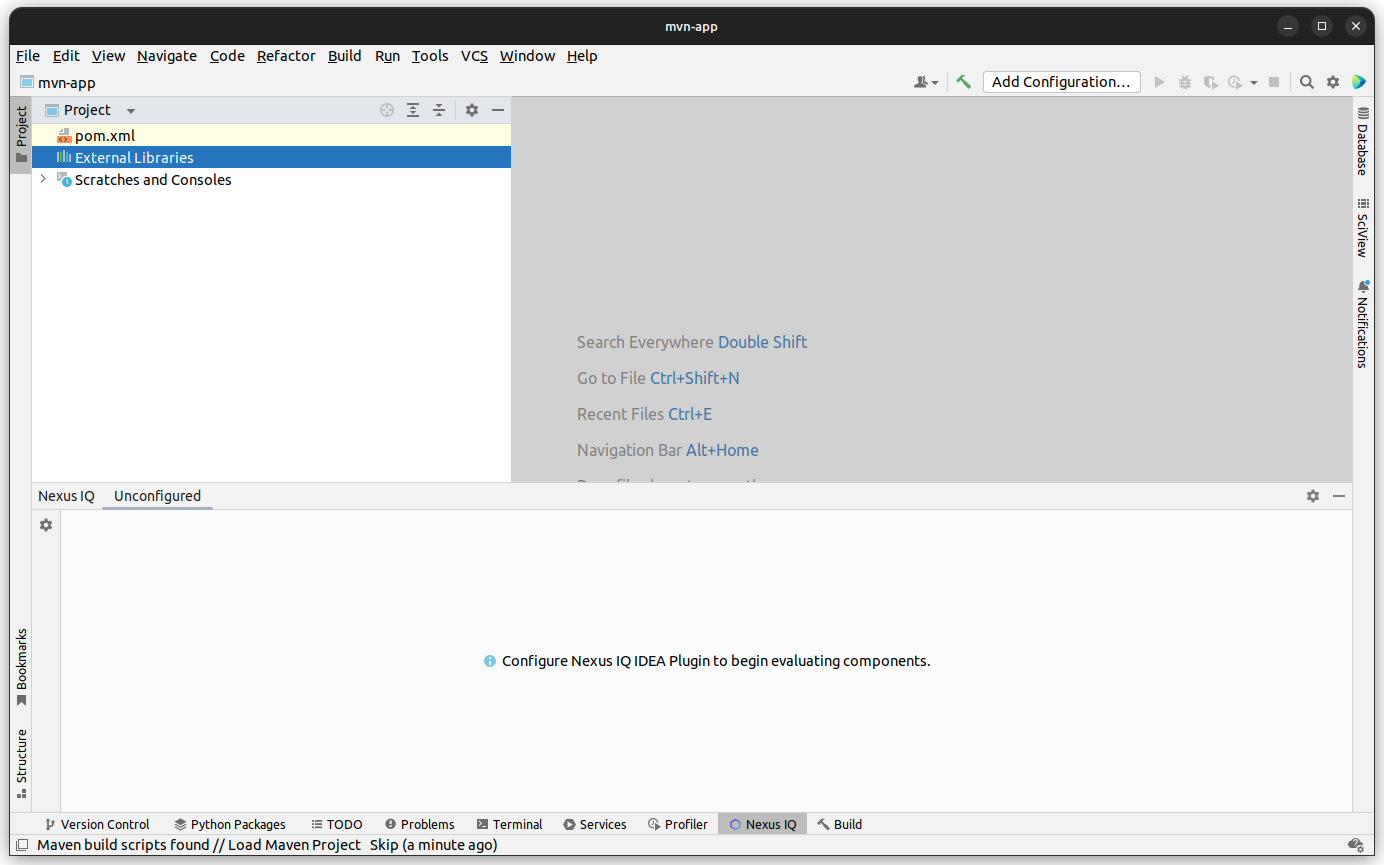 The project (i.e. its manifest files) must be imported to get the list of External Libraries to appear. For Maven projects, locate the root pom.xml file, right-click, then select Maven → Reload project, or Add as Maven Project, depending of your version of Intellij IDEA.

This will convert the project to its proper type which will load the External Libraries: 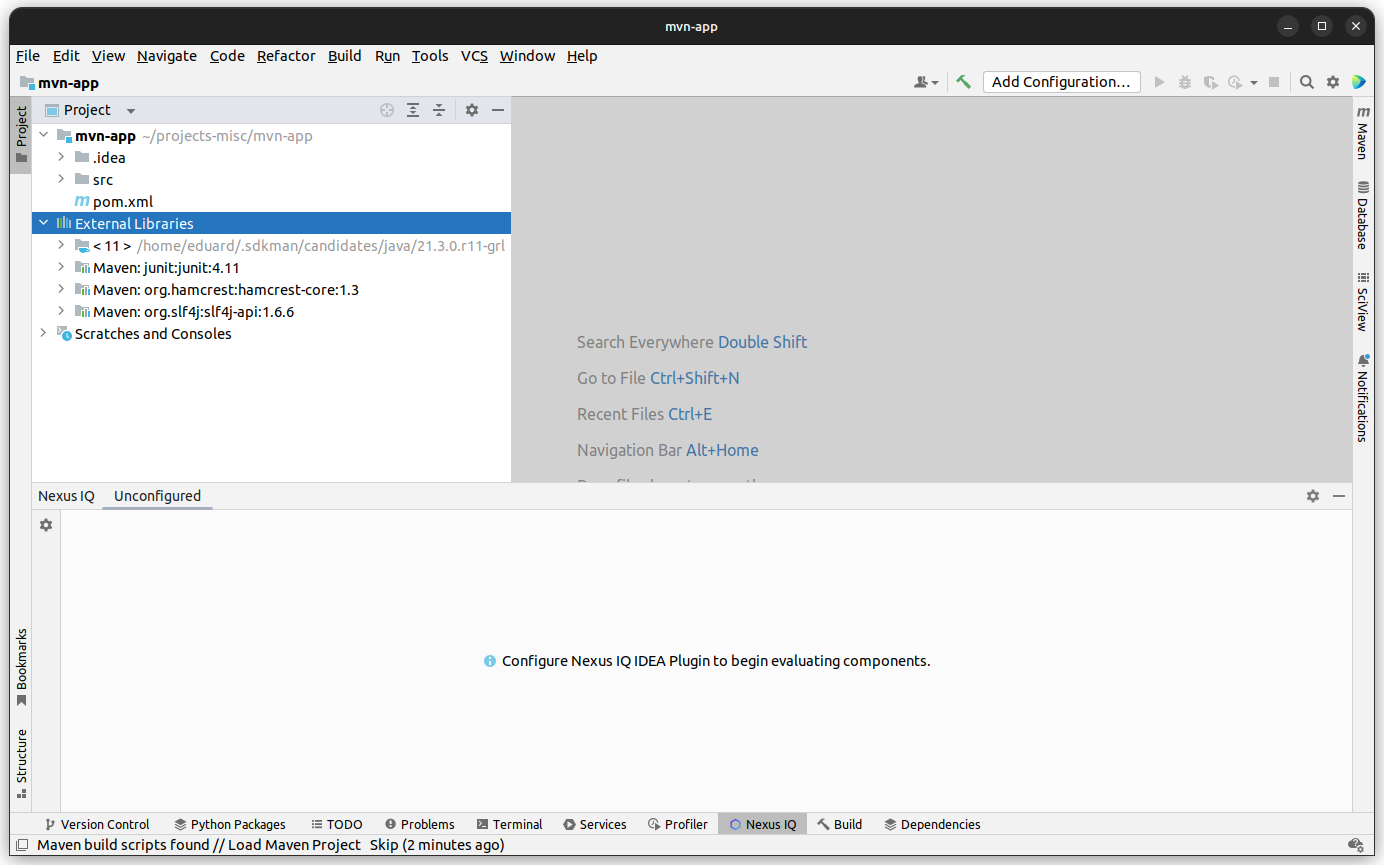 Now, you can click on the Evaluate Components button and the analyzed components will load in the Nexus IQ Component View. The evaluation results will look something like this: 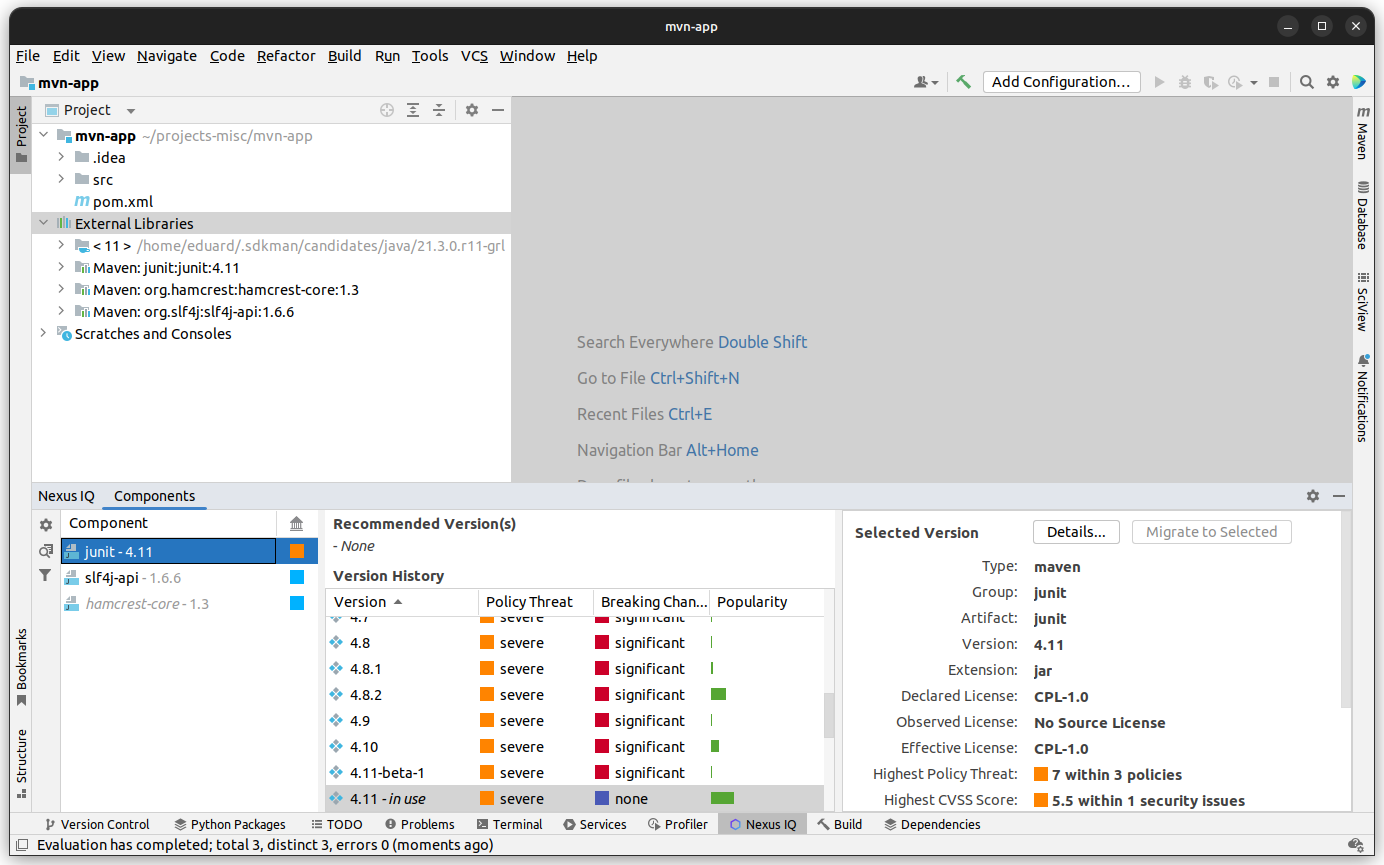 JavaScript projects must be set up in the IDE as Node projects. This can be configured by navigating to File → Settings... → Language & Frameworks → Node.js and NPM. The paths to the Node interpreter and the package manager must be valid (see below). 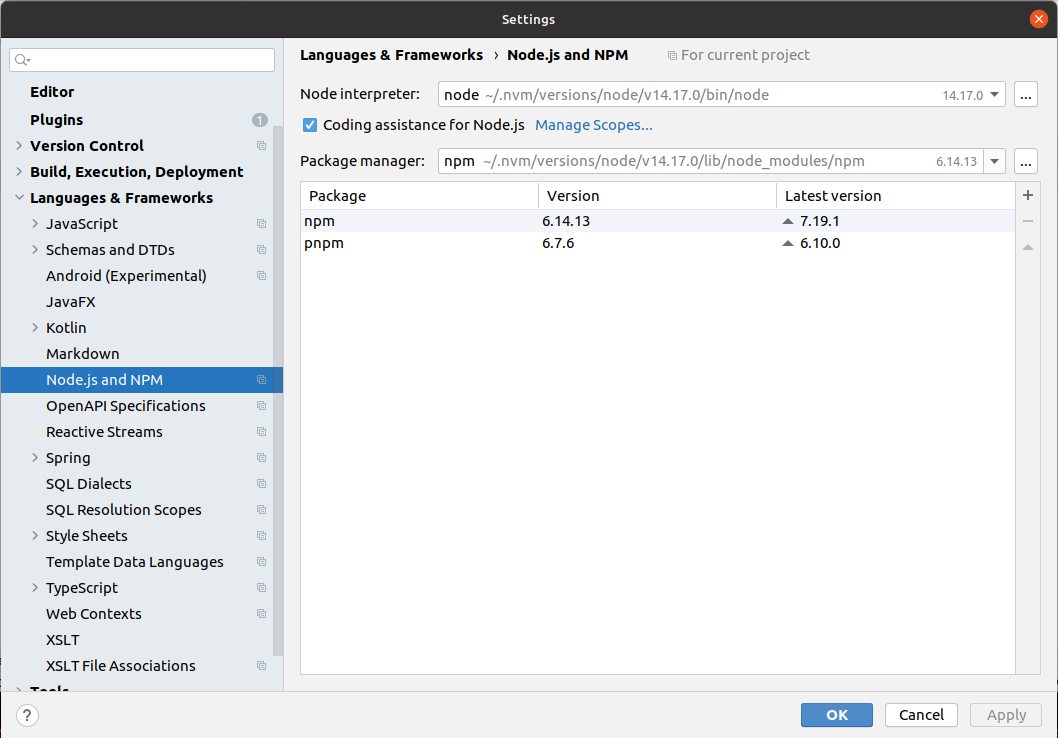 Python must be installed locally on your machine.

If you determine that a component upgrade is required to avoid a security or license issue or a policy violation, after reviewing your component usage, IQ for IDEA can be used to assist you in the necessary refactoring.

The first step to start the migration is to select a newer version for the component in the visualization chart, or by selecting the recommended version. An example is displayed in the image below:

For Maven-based Java projects, the migration process is able to detect circumstances such as the component being a transitive dependency or versions managed in a property. For JavaScript projects, only direct dependencies can be migrated.

After the migration is completed, the component list will be updated and a component scan will be initiated. You should perform a full build, as well as a thorough test, to determine that you can proceed with the new version in your development.

Typically, smaller version changes will have a higher chance of working without any major refactorings, or adaptations, of your codebase and projects, while larger version changes potentially give you more new features or bug fixes.

Your release cycle, customer demands, productions issues, and other influencing factors will determine your version upgrade choices. You might decide on a multi-step approach, where you do a small version upgrade immediately to resolve current issues and then work on the larger upgrade subsequently to get the benefits of using a newer version. Or, you might be okay with doing an upgrade to the latest available version straight away. Potentially, a combination of approaches in different branches of your source code management system is used to figure out the best way of going forward with the upgrade.

IQ for IDEA and other tools of the IQ Server suite can assist you through the process of upgrading, as well as monitoring, the applications after upgrade completion.

Starting with the version 4.3.0 of the plugin, custom code inspections are provided for pom.xml and package.json files. If a component, declared in those files, has critical, severe or moderate policy violations, it gets a code inspection maker attached to it, describing the severity of the violation and providing a link to its corresponding entry in the Component Info view.

Upgrading to IntelliJ IDEA 2020.2 and above