Nexus IQ for SCM adds a comment to a pull request (PR) for repositories configured for source control when the PR introduces a new policy violation.  Note, the terminology for GitLab is merge request (MR).

This is accomplished by comparing the policy evaluation report of the pull request's source branch with:

The PR comment reports Threat Level Low, Medium, and High (2-10) and excludes the Informational level (0 and 1) to keep development focus on policy violations that require most attention.

The following criteria are prerequisites for PR commenting:

IQ server will only create pull request comments for private or internal repositories, with one exception: For GitHub Enterprise, IQ server can also comment on public repositories.

icons that can be seen next to the affected components are used to indicate whether a component is a direct or transitive dependency of the project. For Bitbucket these are shown as text instead of icons (due to a more limited markup).

If PR line comments are created (more details in the next section), links are added to the associated components for convenience. See an example below (for GitHub): 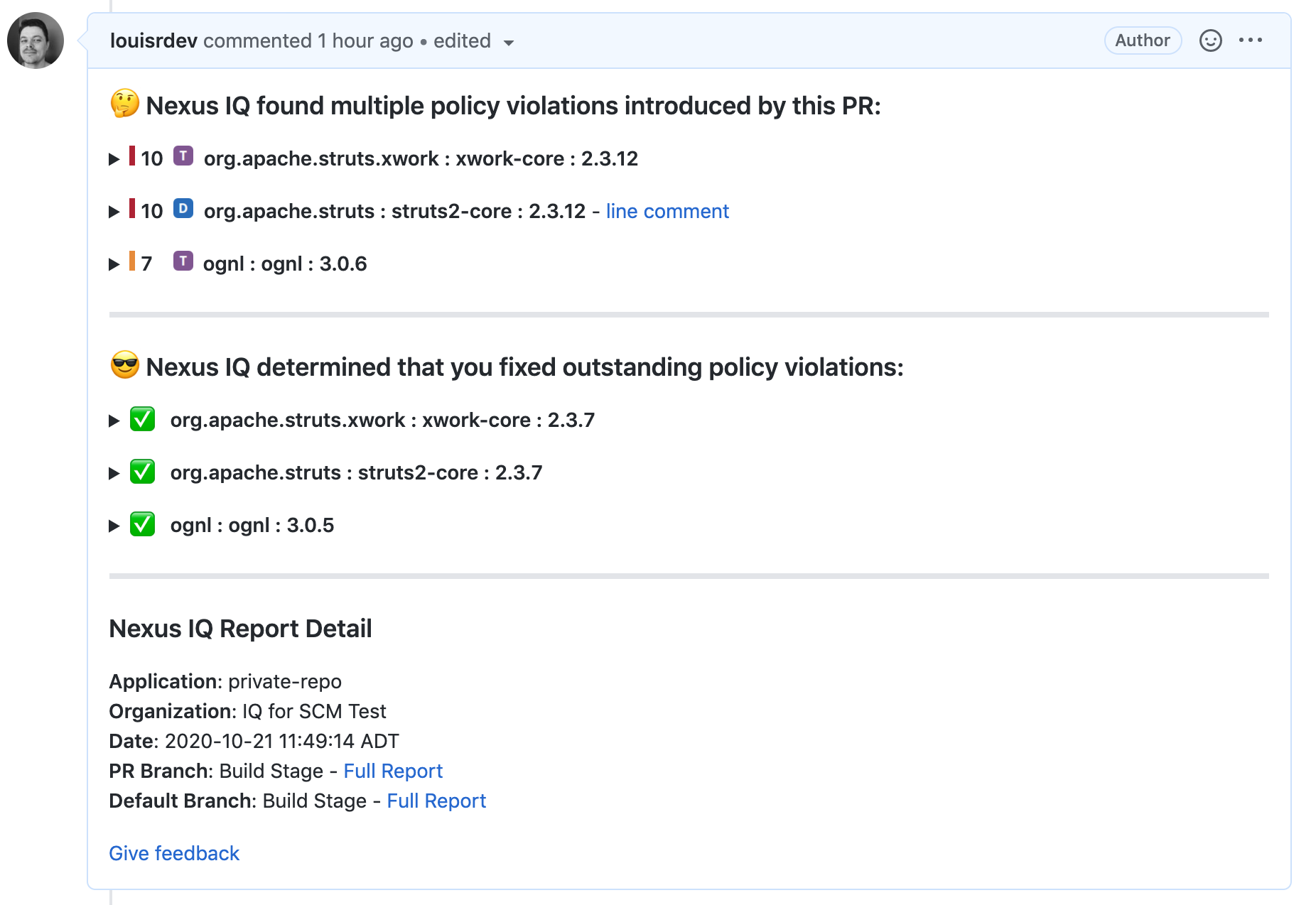 PR comments are generated when:

The PR comment is designed to appear on the PR within a few moments after either of these conditions are satisfied.

Nexus IQ for SCM will update existing PR comments with the latest available information if the feature branch policy evaluation report is reevaluated, or if a new policy evaluation is run against the head commit for the PR.

An attempt is made to create a line comment for each change that introduces new policy violations. That is not always possible due to the fact that line comments can be only created on lines available in the pull request's file diff. On the other hand, sometimes there are multiple potential locations to comment on for a particular component. In those cases, the most relevant location is chosen for each component in order to keep the number of line comments to a minimum.

Identifying changes that introduce policy violations is ecosystem-specific. For now, the PR line commenting feature is enabled for direct dependencies in Maven, Gradle, NPM, and Go projects. The strategy used to identify the location for the line comments is similar to the one used by the Automated Pull Request feature for version bumping.

Similar to the PR summary comment, PR line comments contain the affected component, the summary, and the description of the policy violations that were introduced by the change at the line of code to which the comment is attached. A component version that would remediate all policy violations is also included, if available. The policy violation details are expanded by default. An example is shown below (for GitHub): 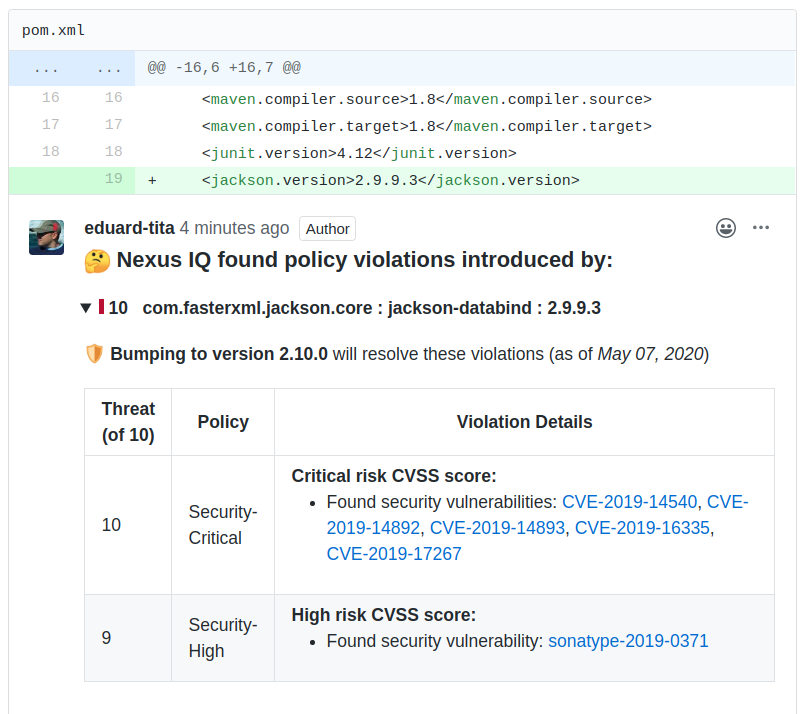 Breaking changes information will inform the developer about the amount of work required to perform the version upgrade whenever suggested remediations for policy violations are included.

In the screenshot below the line starting with a red square and "Multiple breaking changes" was added to the PR comment, based on the breaking changes information available for the suggested remediation. 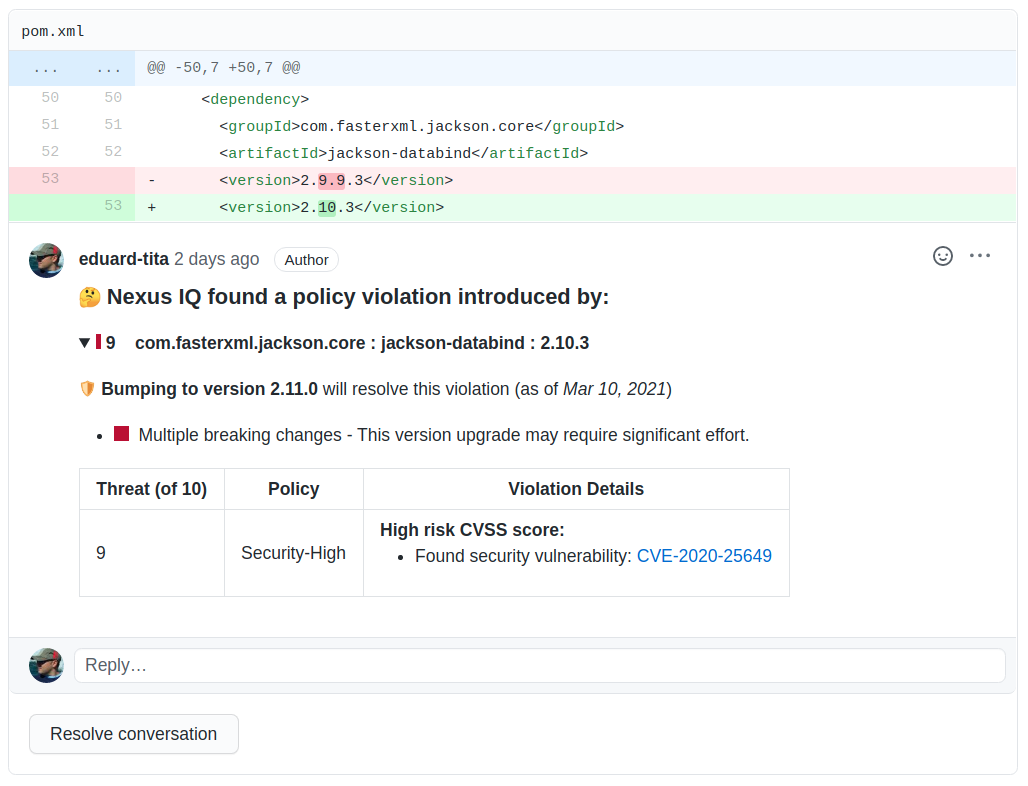 If you experience challenges with seeing Transitive Solver recommendations, please refer to this Knowledgebase article.

In the example shown below, upgrading to the suggested remediation will fix all policy violations for 'jackson-databind' and its dependencies: 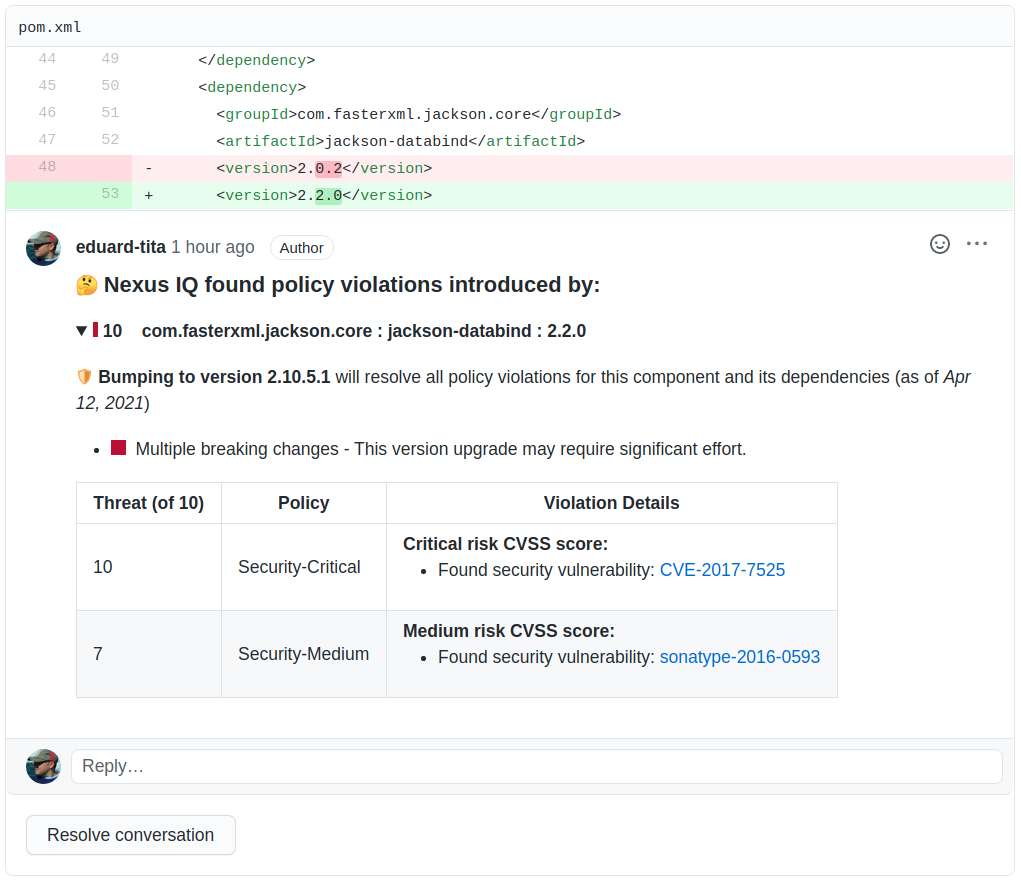 Enabling policy evaluations on feature branches will also increase the amount of disk space consumed by stored application composition reports. Nexus IQ Server can be configured to automatically purge outdated reports, more information on this is available on the Data Retention and Purging page.

Please review the actions in the Nexus IQ Server policy configuration if the feature branch policy evaluation is configured to use the 'develop' stage. By default, using the 'develop' stage will not result in a 'fail' action for any of the defined policies. Status checks, and the associated branch protection only reports failure if the policy evaluation triggers a 'fail' action.