CI/CD pipeline jobs in GitLab leverage custom docker images to perform desired actions in the context of the GitLab project's build workspace.  As such, the GitLab Nexus IQ docker image provides the ability to run Nexus policy evaluation against build artifacts in GitLab and produces a summary report with policy violation counts and a link to a detailed report on the IQ server.

The IQ policy evaluation will pass/fail a GitLab pipeline based on the policy action defined in IQ for the given application and stage.  See the IQ server documentation for details on setting up policies and policy actions.

In addition, Nexus IQ for GitLab can assist with remediation of identified vulnerabilities.  See Nexus IQ for SCM for more information on how to enable and use this capability.

Any project that wants to leverage GitLab's CI/CD pipeline must include a .gitlab-ci.yml pipeline definition file in the root of the project.  Documentation on the various options for pipeline and job definitions is available here.  A GitLab pipeline job that performs Nexus IQ policy evaluation consists of the following elements and would look something like this:

Let's explore some of these elements in more detail:

In order to make GitLab CI/CD pipeline job artifacts available across jobs you should add them to the pipeline cache, which could be defined a little further up in the file, as so:

The required connection information for the IQ server can be specified at either the group or project level using the CI/CD settings, as so: 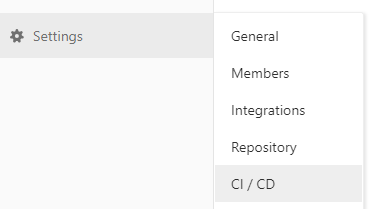 The following three environment variables must be defined if not set explicitly in the job definition via script parameters:

Problems with the IQ server connection will show up in, and can be diagnosed from, the pipeline job output, as so: